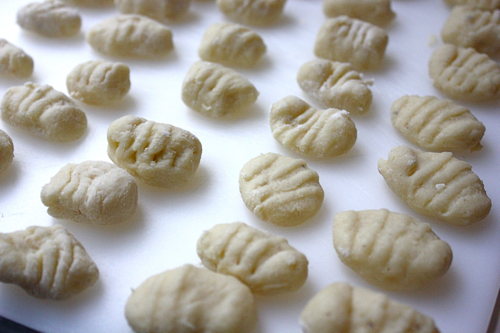 I have wanted to make my own gnocchi for a long time, but I was scared. It seemed like such a daunting and difficult task- especially after seeing Top Chef contestants have their gnocchi massacred by the judges. I couldn’t imagine that mine would be worth eating. Oh, was I wrong. It is definitely worth eating. It’s nothing like the hard gnocchi I’ve found in most restaurants. Instead, it’s melt-in-your mouth light. I think it’s the second best gnocchi I’ve ever had (second to the gnocchi garnish that Cafe St Ex used to put on their steaks). 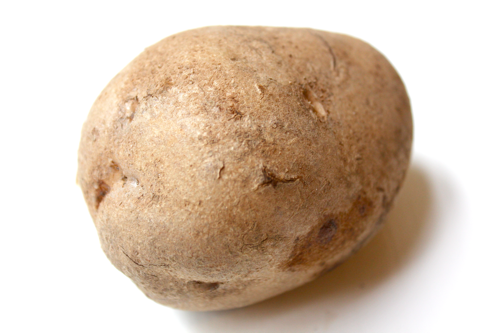 Gnocchi is challenging to make for two reasons. First, it makes an incredible mess. Second, it can get pretty boring rolling out the individual gnocchi (but if you made a smaller batch, it wouldn’t be an issue). If your desire to make gnocchi outweighs these two factors, you should definitely do it. After tasting the outcome, I will definitely be making it again! The first step is to boil some baking potatoes until they can easily be pierced with a fork. I used 8 smallish potatoes (almost 3 pounds). They yielded around 4 generous servings. 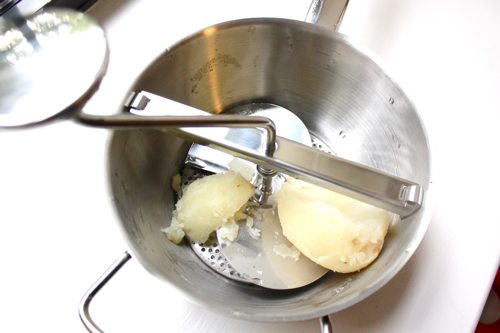 I’ve read that gnocchi is the fluffiest when the potatoes are broken down when they are still hot. So, take one potato out of the water at a time and separate the potato from the skin. This is easiest to do by cutting the hot potato in half lengthwise. Then, run a spoon around the edges of the skin to separate it from the potato, and use the spoon to scoop the potato out of its shell. Put the potato into a potato ricer or a food mill (what I used) and grind it up. 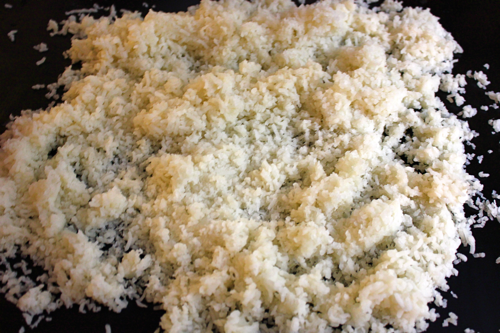 Spread the riced potato out into an even layer to cool. Then, repeat the process with each of your potatoes. 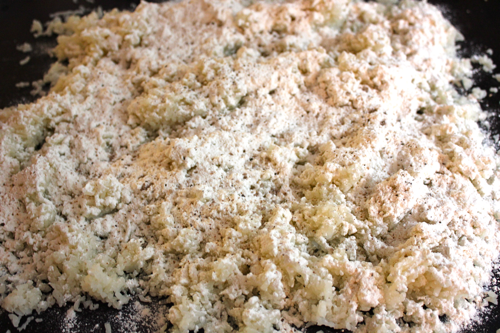 Once your potatoes are prepared, put them into a bowl to start making the gnocchi dough. I mixed my dough on my table and spent the rest of the night scraping it down. Don’t do that! Sprinkle the potato with 1 cup of flour, some ground black pepper, and some grated nutmeg (if you like it). Add 2 egg yolks to the potatoes, and mix everything together until it starts to form a dough. The dough will likely be very sticky. 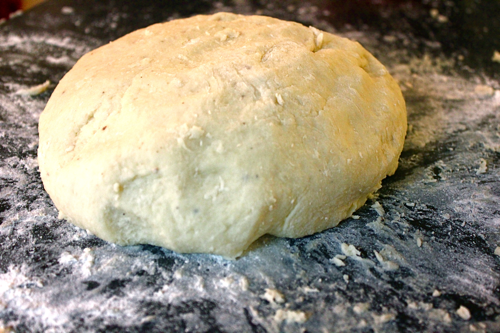 Turn the dough out onto a generously floured work surface and knead more flour into the dough until its stickiness subsides enough that you can work with it. To make lighter gnocchi, you should try to knead and add as little flour to the dough as possible. 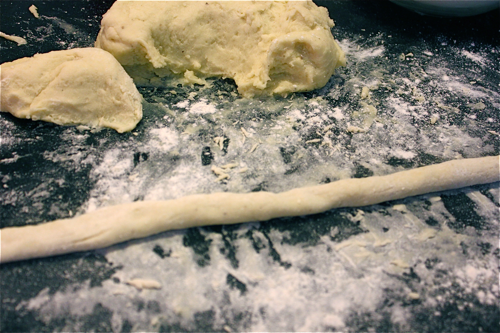 It’s time to start forming your gnocchi. Break off a piece of the dough, generously flour your hands, and roll out the dough until it’s 1/2 inch thick. 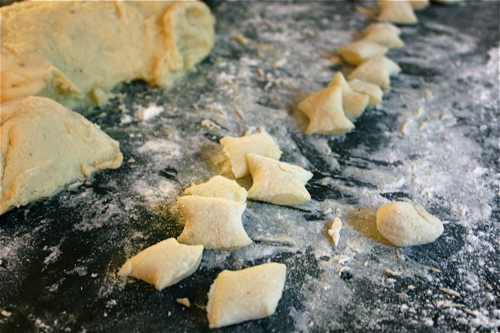 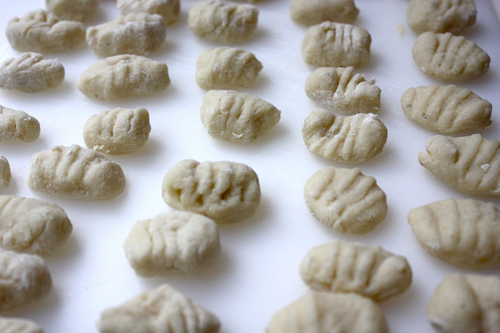 With generously floured hands, roll the pieces of dough into ovals. If you want your gnocchi to have ridges, roll the pieces against the tines of a fork. Place your completed gnocchi onto a sheet pan or other flat, transportable surface. Shaping the gnocchi can be very tedious, and you don’t have to do it if you don’t want to. Simply-cut pieces of gnocchi will be just as delicious. 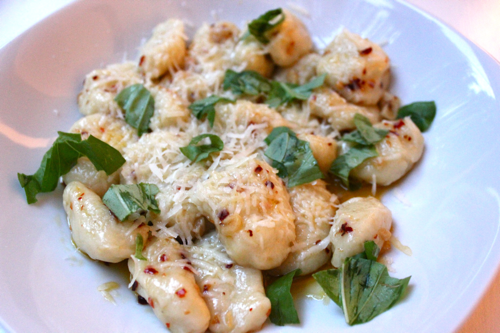 The gnocchi is best when it’s cooked and eaten immediately. Bring a large pot of water to a boil, and add only so many gnocchi that they don’t touch in the pot. The gnocchi will drop to the bottom of the pot like stones, but they will rise to the surface as they cook. Let the gnocchi cook for 1 more minute after they rise, then remove them from the pot with a slotted spoon. Continue cooking the gnocchi in batches.

If you’re not going to eat your gnocchi immediately- don’t cook it, you have to freeze it. Put your sheet pans into the freezer for a few hours until the gnocchi are hard. Then, put them in a sealed container for later. Use the same cooking method on the frozen gnocchi as above, keeping in mind that the gnocchi will take longer to rise in the boiling water. You should also give them an ice bath after they are done cooking because I’ve found that it helps the gnocchi retain their shape and texture.

Sauce your gnocchi however you like. Here, I used olive oil that simmered with red pepper flakes and garlic. I topped the pasta off with basil, parmesan cheese, and pine nuts (Spanish ones). 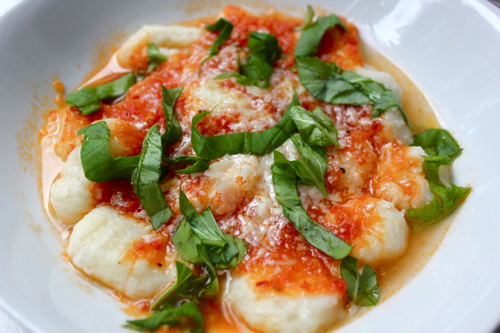 For another easy sauce, purée some tomatoes, garlic cloves, and olive oil in a food processor. Add some black pepper, salt, and red pepper flakes. Then, simmer it on the stove until it reduces into a thick, chunky sauce.

Good luck in your gnocchi adventures. Let me know if you have any techniques for making the perfect gnocchi!