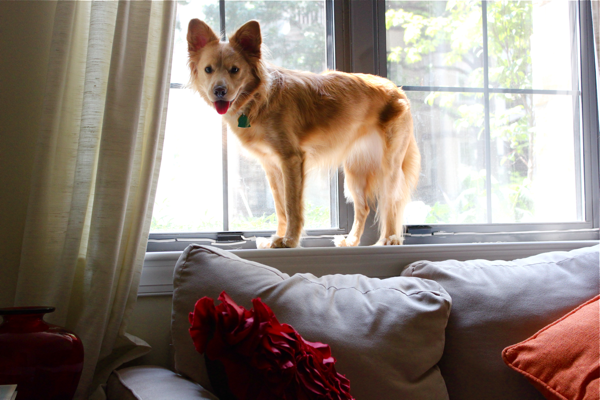 I don’t think I’ve ever told you about the time Stella almost caught on fire, but I’ve been thinking about it a lot recently. PTSD, much? Last summer, the city started doing some work to change out a traffic light on my corner. It was the kind of traffic light that sat on a kind of pedestal. The workers took the traffic light off of the pedestal and mounted it on a concrete block just a few feet away. But the traffic light needed an electrical connection, so they ran wires from the old pedestal stump over to the new traffic light to keep it alive. It sat like this for a while. Maybe days, maybe weeks. The old stump was open on top, and over time, it started collecting trash and debris. The side of the stump also had a window cut into it so the wires could run out and over to the new traffic light. 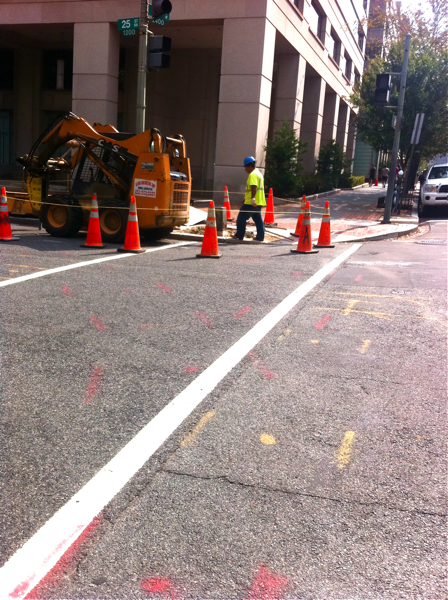 One day, Stella and I were standing on the corner with the stump waiting to cross the street. She must have gotten a sniff of something good inside the stump because the next thing I knew, she was putting her head right into the side window. I didn’t want her to get a chicken bone or any other trash, but I couldn’t yank on her leash because her head would knock against the inside of the stump. So I went around behind her to pull her out backwards. As I did that, her dog tags must have touched some of the exposed wires because we heard a loud buzzing and, all of a sudden, a large flame came up from the bottom of the stump. We both pulled back just in time to avoid the fire, and we were completely shocked. I grabbed Stella and ran across the street as fast as I could because I didn’t know if the stump was going to explode. Stella was perplexed and kept turning back to look at the stump as if she couldn’t understand what happened. I checked Stella all over, but she didn’t seem to be burned. I scanned the sidewalk for witnesses. And then I cried and cried imagining what I would have done if Stella had caught on fire.

When I got home, I sent a strongly worded repair request to the city, and workers flocked to the stump almost immediately. That surprised me, I was expecting unresponsiveness. But their days of repair couldn’t make me feel better. I couldn’t sleep, I just kept replaying the moment in my head. I’ve never really forgotten about it. And then, a few weeks ago, I was walking with Stella somewhere else, and we were waiting to cross the street. Out of the corner of my eye, I noticed her getting way too close to another traffic light with a hole it its pedestal. I yanked her away before she could get any closer, but all of the same panicked feelings rushed right back again. I am lucky that this story isn’t as horrible as it could be, but I learned a few things from it. First, always keep an obsessively close watch on your dog. Second, always take a cell phone with you, even if you’re just going for a walk around the block. I never want to call someone and say, “Help, my dog is on fire!,” but I’d like to have the option.