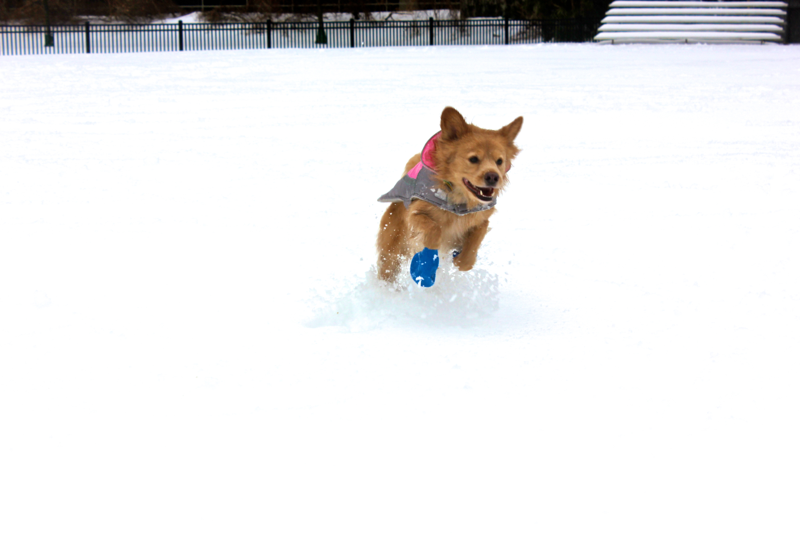 Stella absolutely loves playing in the snow, but it takes a toll on her paws. She has really hairy toes, and the snow tends to form ice balls around the hair and get wedged up in her paws. It’s painful for her when she’s out walking, so we have to stop and loosen them out. Once we get home, we have to melt the icicles out of her paws by the front door, or else she walks away and the snow slowly melts into puddles all over the place. Stella’s paws also get burned by some salted sidewalks. She stops in the middle of the street, holding two of her paws in the air, and we have to scoop her up and carry her past the danger zones. Thank goodness she isn’t a bigger dog! 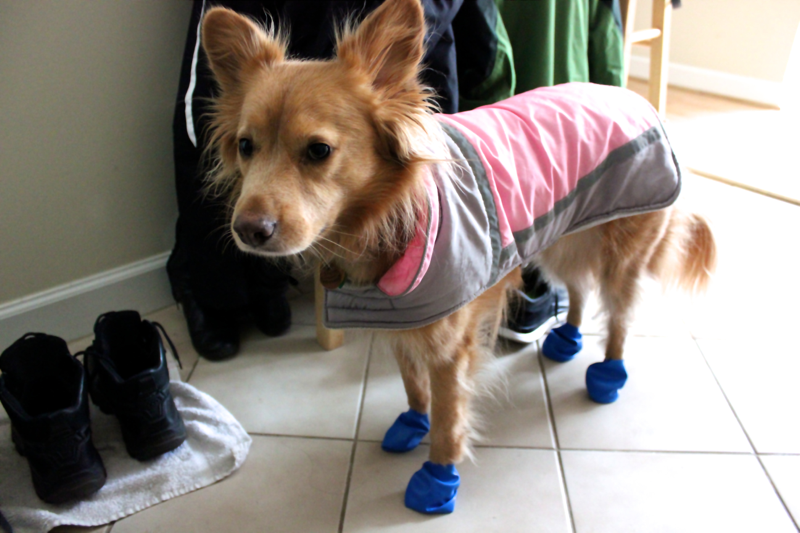 After a particularly snowy winter and many days filled with paw maintenance, I decided to get Stella snow boots. I’ve seen other dogs in the neighborhood wearing these balloon-like boots, so I figured that Stella would be able to tolerate them too. Teaching her to wear the boots was hilarious- once a boot would go on, she would act like she couldn’t walk with that paw. The first time I got all four boots on her, I couldn’t stop laughing at her flopping around. To get Stella used to the boots, I would put one on and get her to walk to a piece of cheese. Once she seemed comfortable, I’d add another boot and repeat. We did a few practice runs inside before she finally sported her boots outdoors. 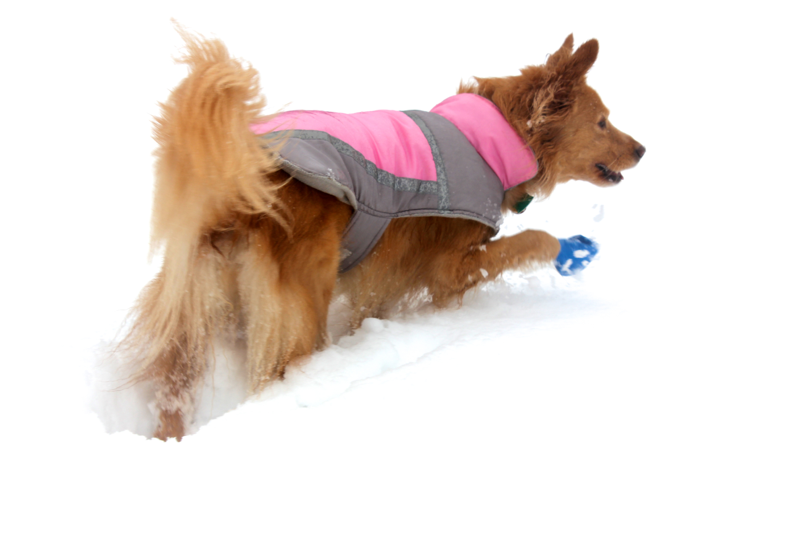 On her first snowy outing with the boots, she acted totally normal and didn’t pay attention to the boots at all. She was too busy prancing through the snow and having the best time. 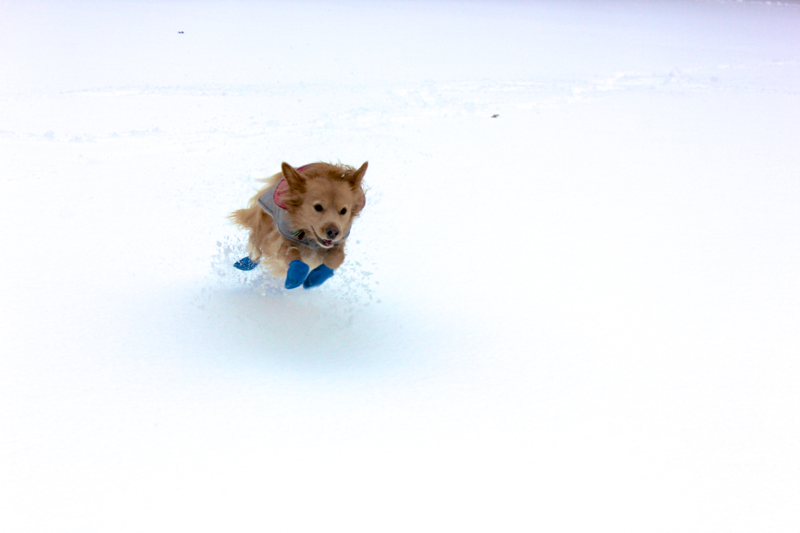 She ran, jumped, and played through the foot of snow we had, and the boots remained secure. They didn’t slip off and her nails didn’t pop through them. We didn’t have to stop to scoop snow out from between her toes, and we didn’t have to carry her over the salted sidewalks. The boots were a raging success! 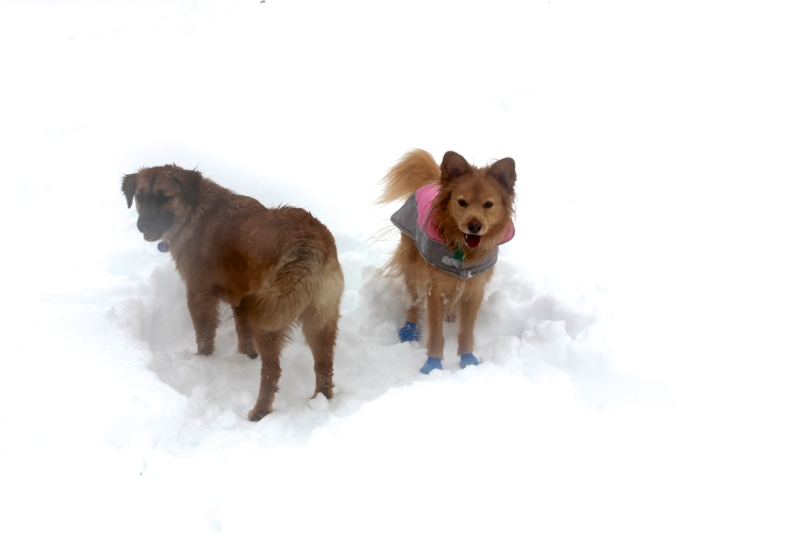 The snow, on the other hand, posed a different challenge! It was so tall, that Stella could rest her butt on it while standing up. I patted down an area of snow so she could have a landing pad to rest on. Stella and her new friend used the landing pad to take a break from their frolicking. 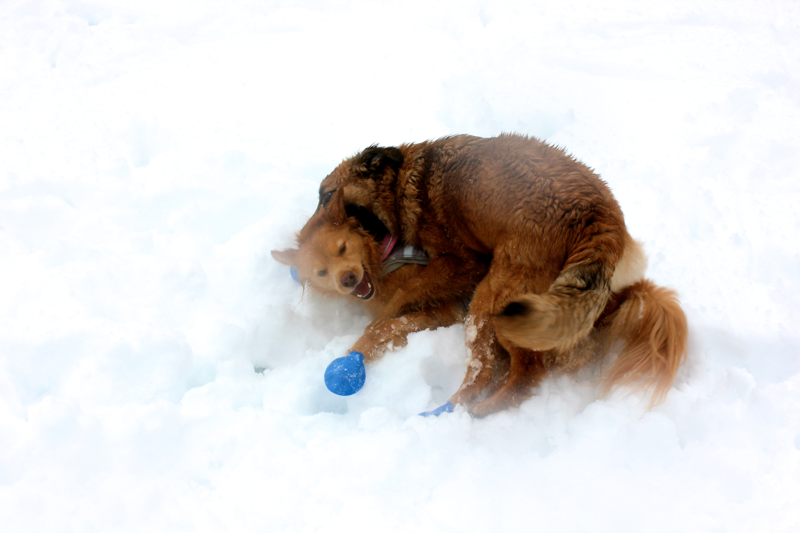 She had the best time playing, and so did we!