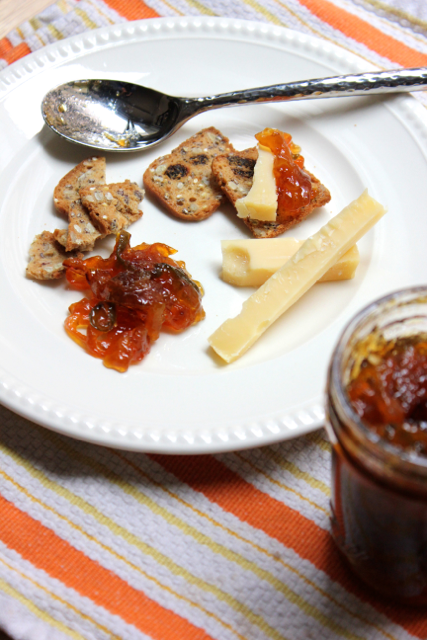 This marmalade is an amped up version of orange pepper jelly. It’s tangy, sweet, and spicy all in one, and it is fantastic with cheese. I want to spread it all over a wheel of brie, wrap it in puff pastry, and bake it until it’s crispy, melty, and full of complimentary flavors. You could even use this marmalade as a kind of chutney, perhaps as part of your Chinese New Year celebration. What’s most amazing is how easy it is to make without using any fancy or annoying ingredients. Grab up some kumquats while they’re fresh and in season, and have at it. 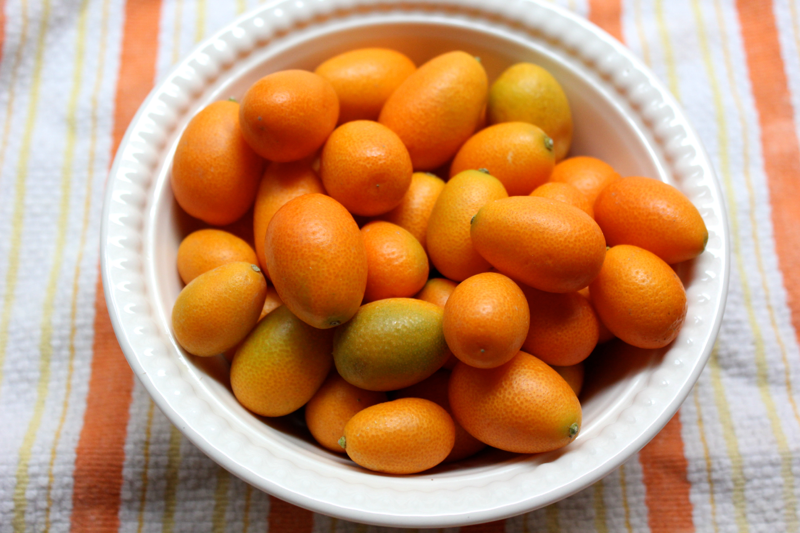 I have never been a kumquat lover. Most of my family can’t get enough of their tangy sharpness and have fun eating them whole. For me, I’m still trying to acquire a taste for orange peels. Obviously, chocolate covered orange peels are an excellent starting point. As is this marmalade, where the orange intensity is significantly mellowed but not completely absent. 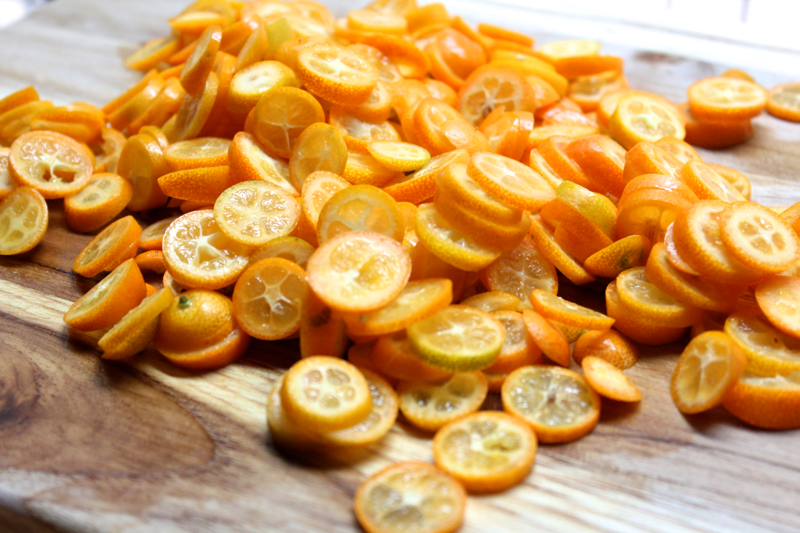 To make the marmalade, get 1 quart (approximately 1 pound) of kumquats, and slice them thinly cross-wise. As you slice them, your knife will get slowed down by small seeds that hide in the center of some of the kumquats. I opted to flick these seeds out and discard them. But because my family eats kumquats whole, seeds and all, you could choose to leave them in your marmalade if you’d like. 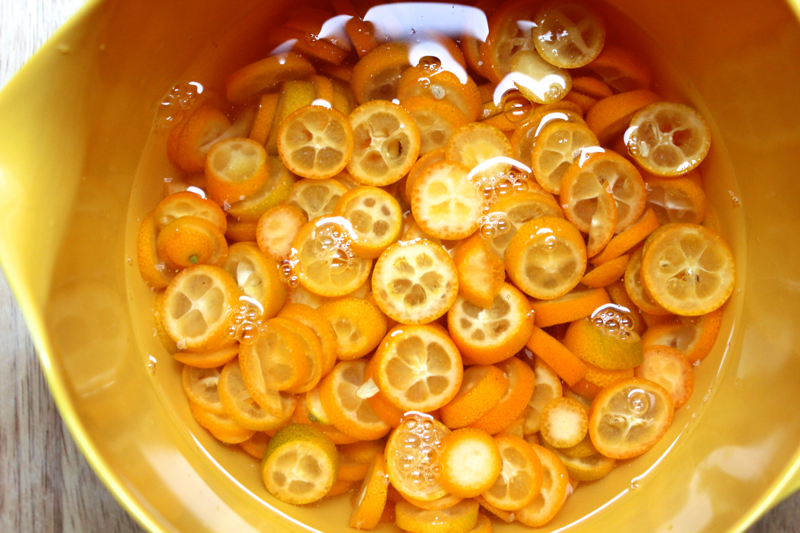 Transfer the kumquat slices to a bowl, and fill it with 2 cups of water. Some kumquat seeds might float to the top, and you can skim them off and discard them if you like. Put the bowl of kumquats in the refrigerator overnight to allow the skins to soften. 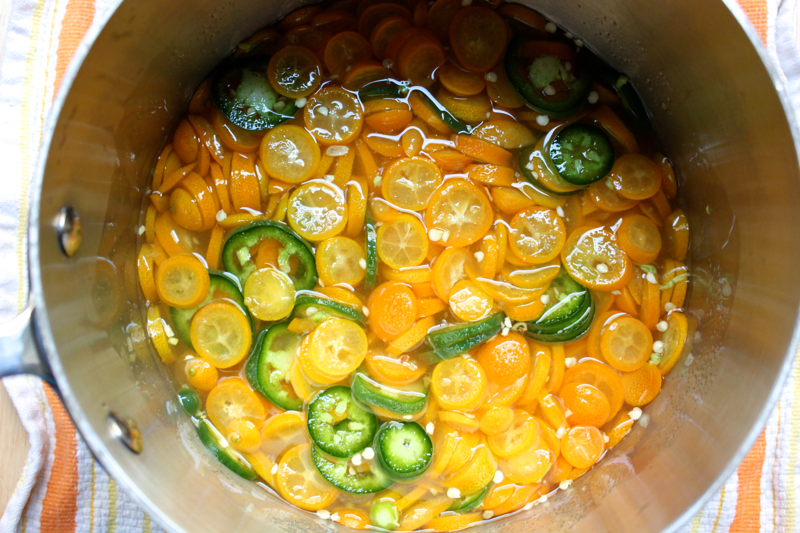 The next morning, you’ll notice that the kumquat mixture will have thickened and jellified somewhat. That’s from the natural pectin being released from the kumquats- it’s like magic! Transfer the kumquats to a pot. If you want your marmalade to be spicy, slice up some jalapeño and add it to the pot as well. I used one whole jalapeño, seeds and all, and found it to be a bit spicier than I would have liked. I’d recommend either de-seeding a jalapeño or using only half. Stir 1.5 cups of sugar into the pot. 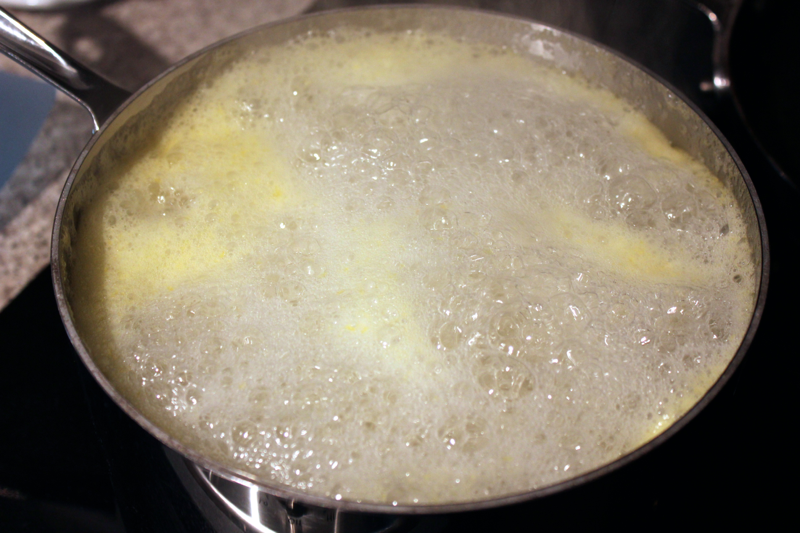 Bring the kumquat mixture to a boil. Once it starts foaming up, give it a good stir. Reduce the heat slightly, but keep the mixture at a boil. Stir it occasionally to prevent any bits from sticking to the bottom of the pot and burning. 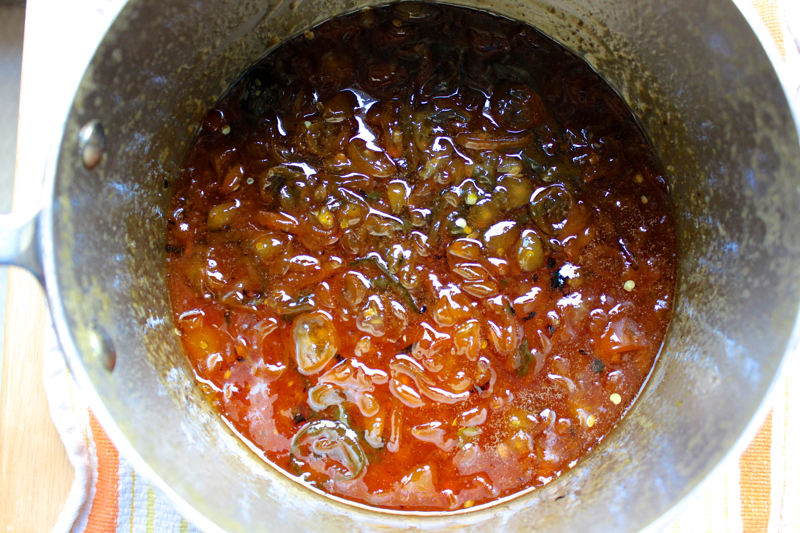 When most of the water has cooked out of the marmalade, the marmalade will have reduced down significantly. As soon as the marmalade starts to turn golden, remove it from the heat to prevent the sugar from burning. The marmalade should also have a jelly-like consistency. Time estimates are inexact and depend on the amount of water in your marmalade, the intensity of your boil, and the width of your pot. With 2 cups of water (plus whatever juices were in my kumquats), an intense boil, and a pot measuring about 7.5 inches in diameter, my marmalade took about 30 minutes to reach this stage.

Transfer the marmalade into jars to cool. You could sterilize your jars for proper canning, or just store the marmalade in the refrigerator. Enjoy your delicious beauty!

This recipe is adapted from White on Rice Couple.