I originally posted my latke recipe in 2011, but I’ve continued to tweak it in my own kitchen every year. And now, I have finally achieved what I call The Golden Ratio (potatoes : salt : binders) that produces the best formed and tastiest latkes. A few other tips and techniques make latke production as efficient and reliable as it can be. But if anyone has tricks for eliminating lingering latke smell from a kitchen (or a head of hair), please send them my way!

This recipe makes approximately 18 latkes. A reasonable serving size is 3-4 per person. If you want to double the recipe, I recommend making 2 consecutive batches. If you double the potato mixture up front, it will oxidize and turn black before you’re able to fry it all. And while oxidization doesn’t affect the flavor, it certainly affects appearances, as my sisters love to remind me!

In a large bowl, whisk together 3 egg whites, 2 tablespoons of flour, and 2 teaspoons of salt.

Using the small holes of a box grater or food processor grating attachment, grate 1 yellow or white onion and 3 russet potatoes. I don’t find it necessary to peel the potatoes first. Although most latkes are made using large gratings, I think the smaller ones give a better texture – crisp latkes will first shatter and then melt in the mouth. So satisfying!

This next step is so important – please don’t skip it like I used to. Transfer the gratings to a thin kitchen towel or cheese cloth and squeeze out as much of the liquid as you can. To prevent the potato juices from discoloring your towel, rinse it after wringing.

You don’t have to go crazy, but you’ll be surprised by how much liquid is released. And the less liquid that is in the latkes, the less they will splatter when they’re added to hot oil. And the less they splatter, the cleaner your kitchen!

Dump the gratings into the bowl and mix it all together with your hands. Transfer the mixture to a strainer set over a bowl to catch additional drippings.

Heat about 1 centimeter of vegetable oil in a skillet over medium heat. When a piece of the potato sizzles, it’s ready to go. Also, if you happen to have duck fat or schmaltz around, add a dollop into the vegetable oil for nice flavor. For speed, I recommend frying in two skillets at once. Measure 1/4 cup of the latke mixture, then compress it into a patty with your hands, squeezing out any remaining liquid. Put the patty into the skillet, and keep on going until the skillet is full.

When you see the potato browning on the edges and you have good color, flip the latkes over to cook on the other side. If you’re preparing your latkes in advance, I recommend cooking them to a lighter color than you’d otherwise want, like I did here. It gives you flexibility to heat them to a golden crisp in the oven later without burning them.

When cooked, I like to transfer the latkes to a cooling rack set over paper towels. The air circulation helps keep them crisp. But you could also put them straight onto paper towels. If you’re making a second batch, skim any burning bits out of the oil. Also feel free to add more oil, if it starts to run low.

Serve your latkes with a side of high-quality apple sauce. 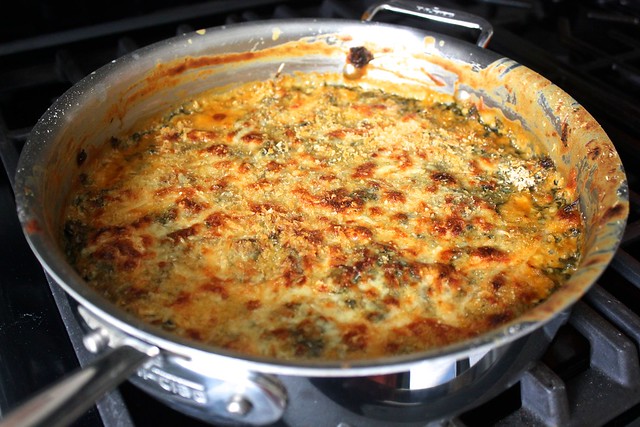 I was effectively ejected from the Global Supper Club after moving to Philadelphia, but its recipes live on in my heart and my kitchen. This decadent kale gratin was one of the stars when our group prepared a Friendsgiving feast, and I made it this year when I hosted my family. Yes, that means I finally got the chance to roast a whole turkey (so easy- like cooking a big chicken), but I’m not sure it’s even worth sharing a recipe for that. But this kale gratin should definitely grace tables far and wide, because smokey, cheesy greens are key to warmth and happiness. 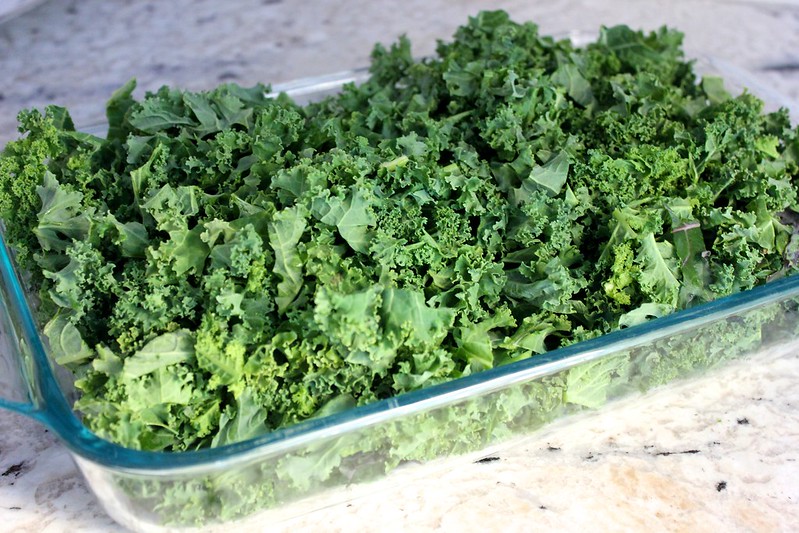 To make it, get 2 bunches of kale. Any variety will do. Wash the kale, remove the stems, and then slice the leaves into thin shreds. You’ll need about 4 packed cups of shredded kale. 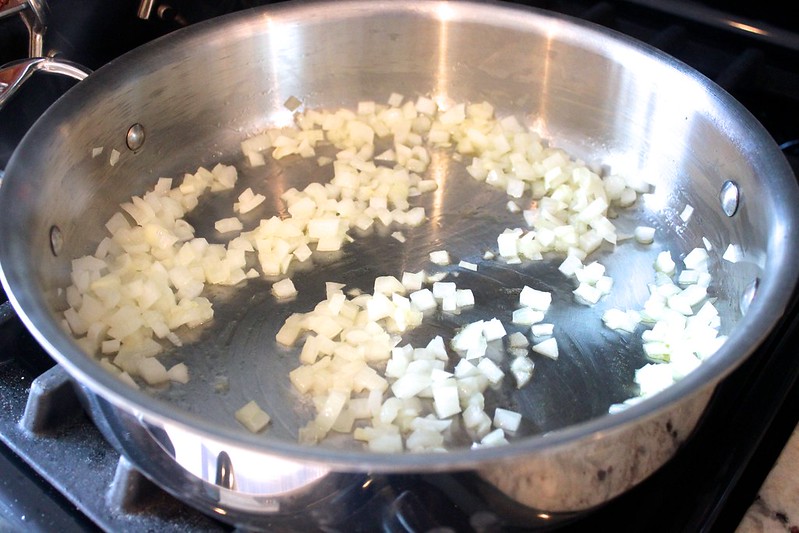 Small dice 1 small onion or 2 shallots. Then, sweat them with some olive oil in a large, oven-proof sauté pan. 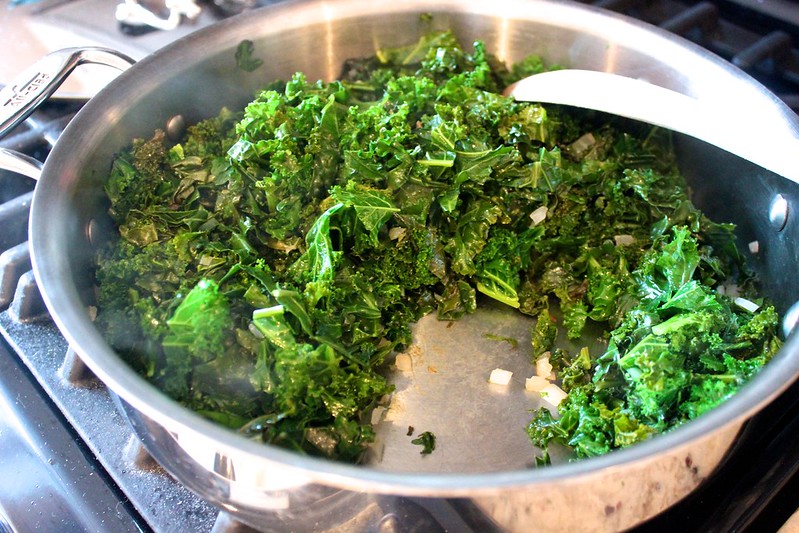 Once softened, add the kale and a splash of white wine. To help the kale wilt, cover your pan, and toss the greens occasionally. Season the kale lightly with salt and pepper. Once wilted, transfer the kale and onion to a side bowl.

While the kale wilts, grate 2 cups of a melty cheese- gruyere and/or cheddar are good. Also grate 1/2 cup of parmesan cheese. 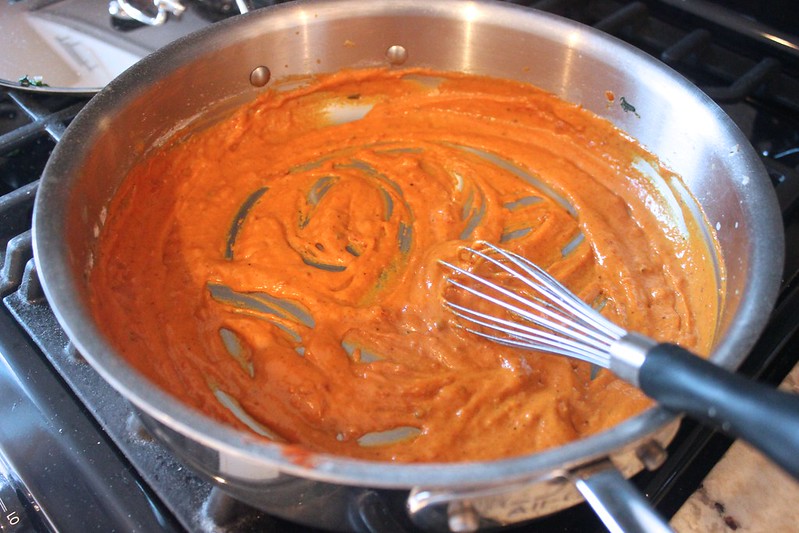 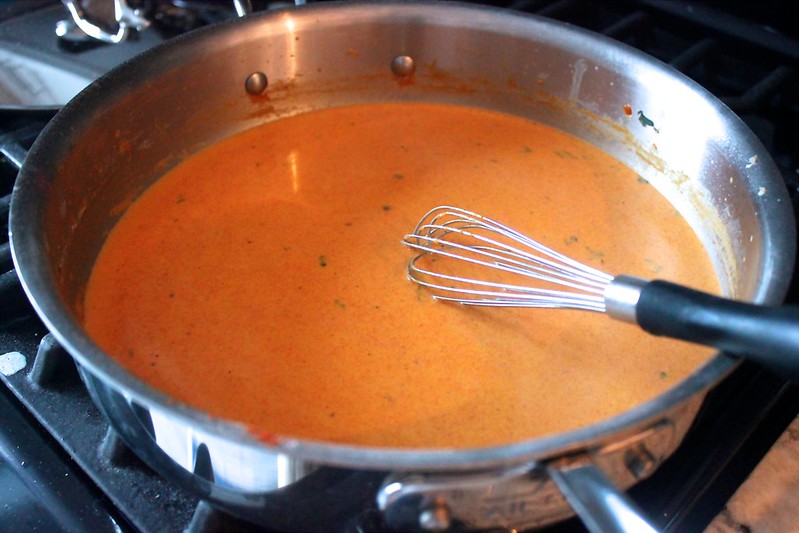 Very slowly whisk in 2 cups of whole milk. When you add the first splash of milk and whisk it in, the paste will thicken. Continue this process, allowing the milk to fully incorporate each time, and you’ll eventually get an even sauce. Heat the sauce, stirring almost constantly, until it steams and begins to thicken. 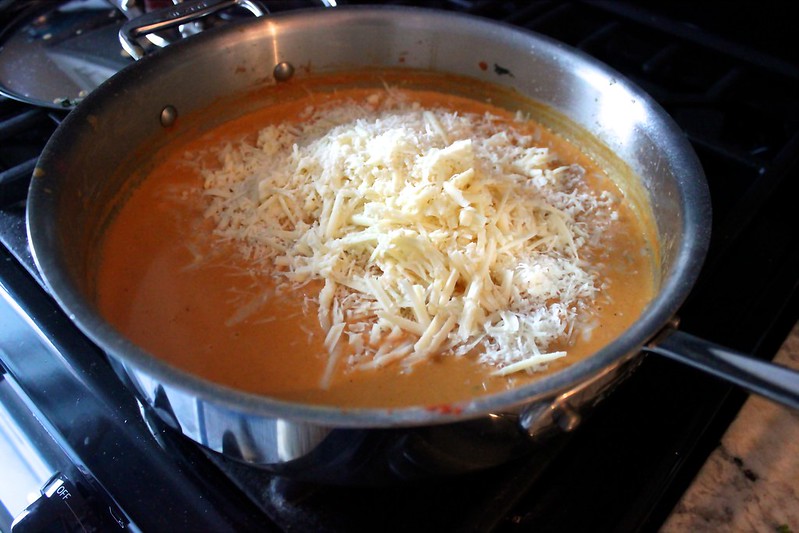 Remove the sauce from the heat, and add in most of the cheese, but reserve a few handfuls of the cheese for a topping. Preheat your oven to 325° F. 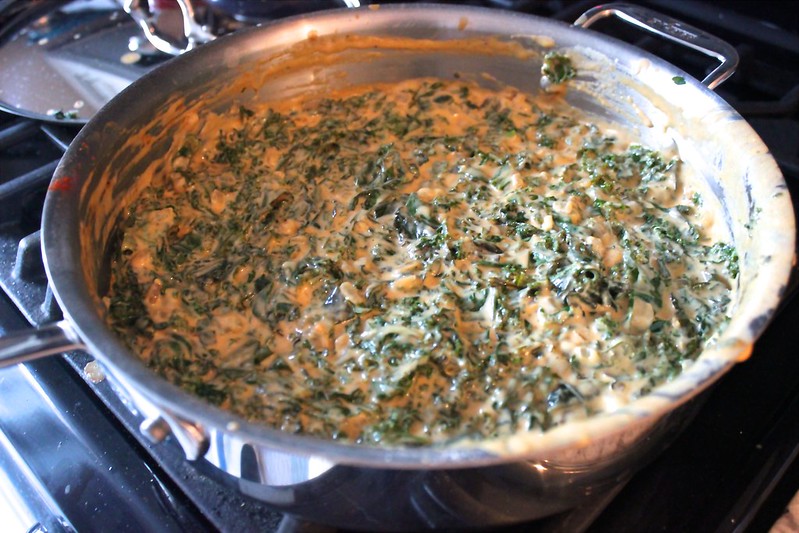 Once the cheese has melted, stir in the kale and onions. Taste, and season with salt as needed. 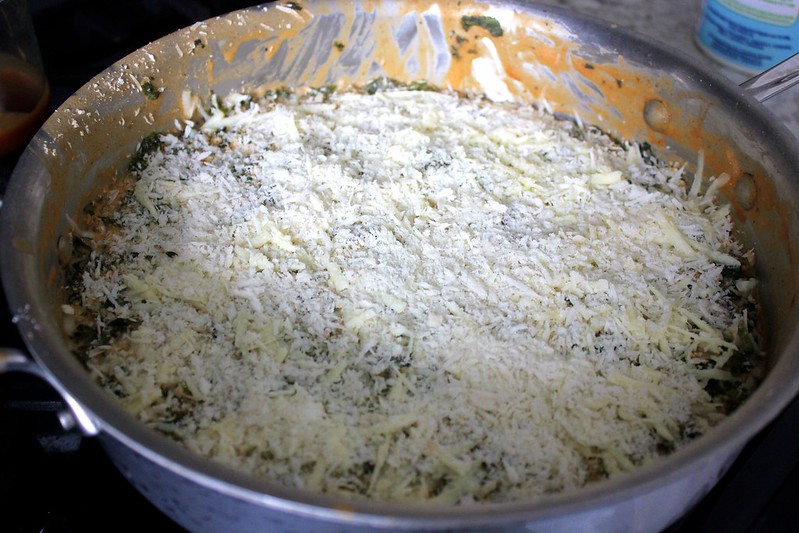 Top the kale with the remaining cheese and 1/4 cup of panko breadcrumbs for extra crispness. 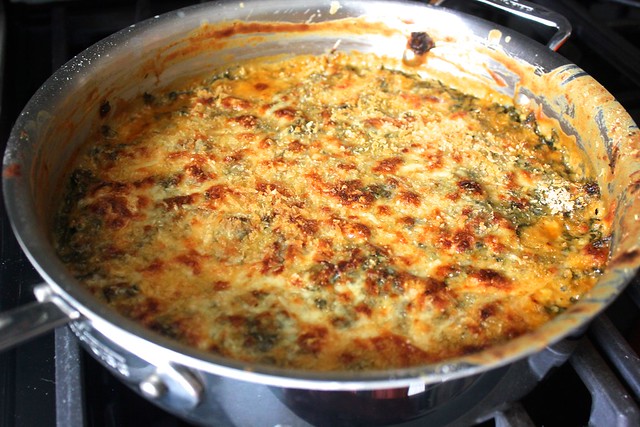 Bake the gratin for 20-30 minutes, just until the edges of the gratin bubble and the cheese topping begins to brown. To maximize your crust without overcooking the kale, put the gratin under the broiler. Serve the gratin in the skillet, doling out small scoops of decadence to all you love. 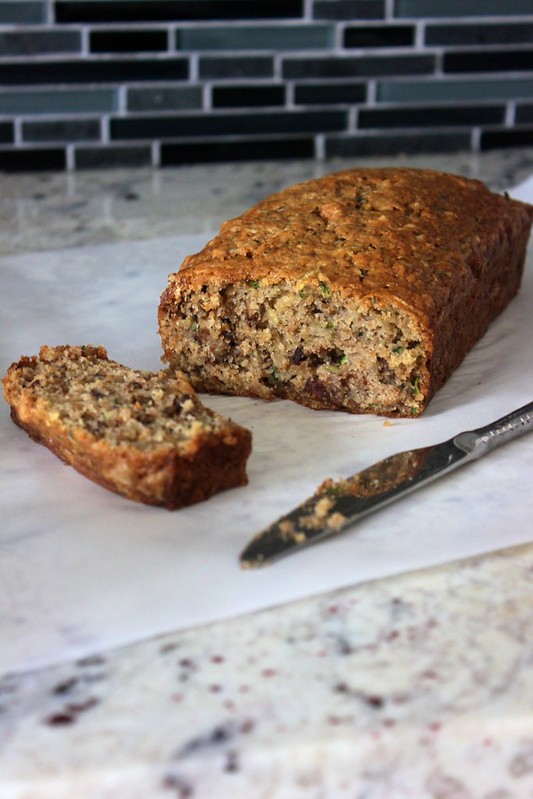 I have been making this zucchini bread regularly for years, and it’s really not fair that I haven’t let you in on this recipe until now. It’s the perfect thing to make when the farmers markets are overrun by zucchini, or when you find that rogue, overgrown squash in the back of your garden (not a problem I’ve ever been lucky enough to have). This bread is just sweet enough to work as a satisfying dessert, but it’s packed with enough healthy ingredients to pass for breakfast (a pleasure I frequently enjoy). Flecked with bright green zucchini, studded with toasty walnuts, sprinkled with flax seeds, and fortified with whole wheat flour- you must embrace this delicious loaf! 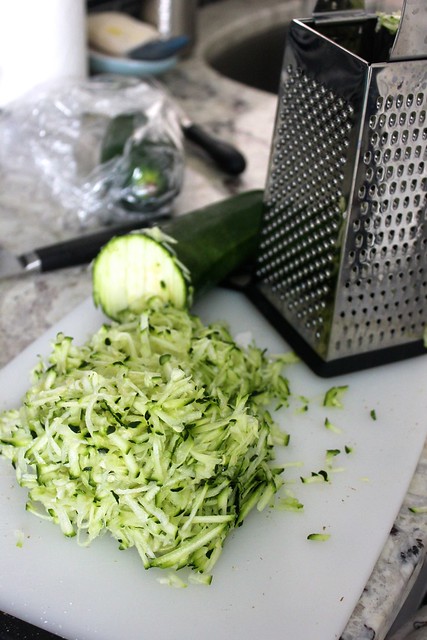 Even better, this recipe makes two loaves. Keep one for yourself, and give the other to someone you really like. To make the zucchini bread, heat your oven to 325° F. Spread 1.5 cups of chopped walnuts on a baking sheet, and put them in the oven to toast. Meanwhile, grate 2 cups of zucchini on the large holes of a box grater. Grating zucchini is effortless and satisfying. 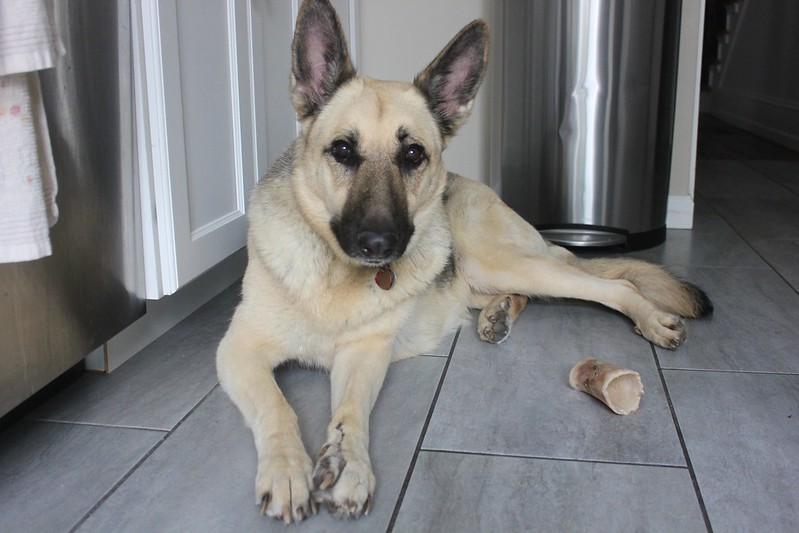 Here’s my Nara girl. She’s always in my foot space when I’m working in the kitchen. 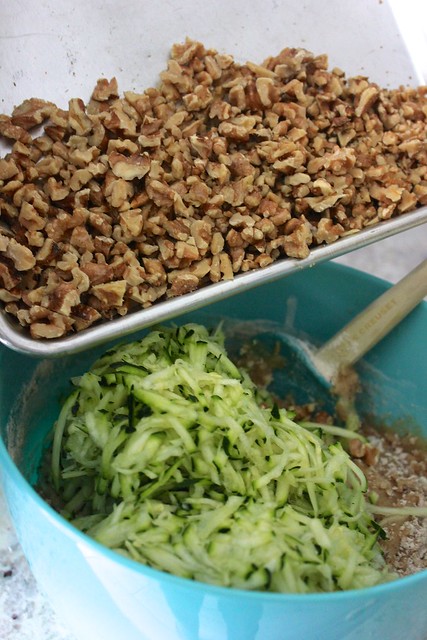 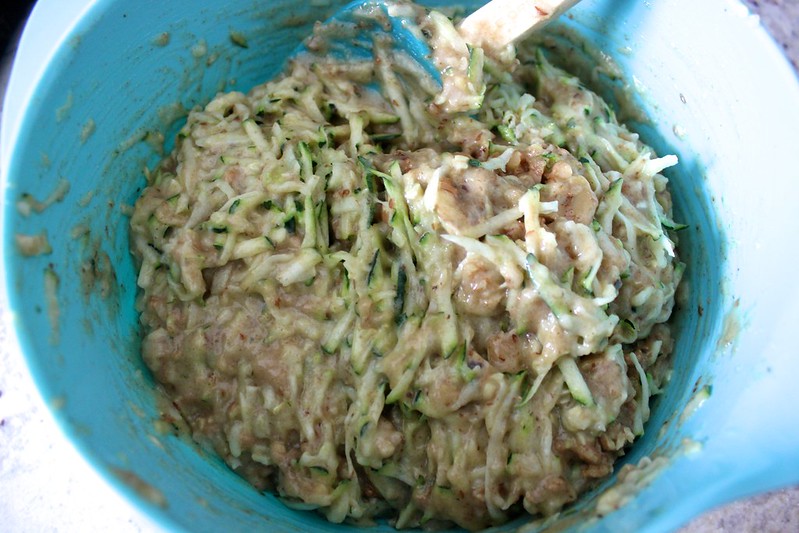 Then, fold in the grated zucchini (squeezing out excess liquid, but you don’t have to be exhaustive about it) and toasted nuts. 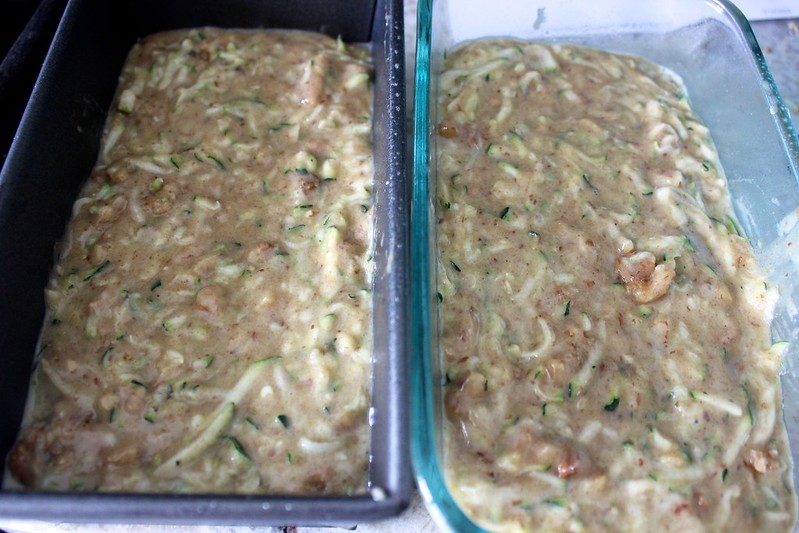 Grease 2 loaf pans, and divide the zucchini batter between them. 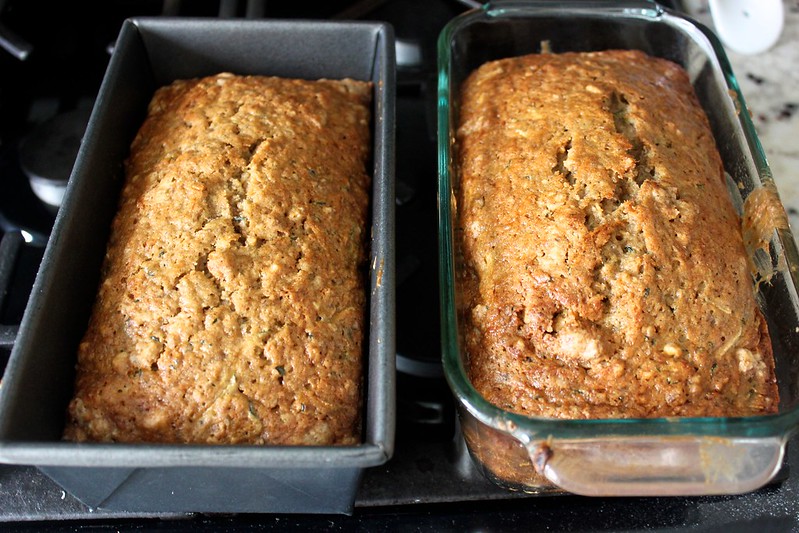 Bake the zucchini breads for approximately 60 minutes, until a toothpick inserted into the center of each loaf comes out clean. Loaves in metal pans tend to finish cooking about 5 minutes before loaves in glass pans, so keep an eye on them if you’re using both, like I do. 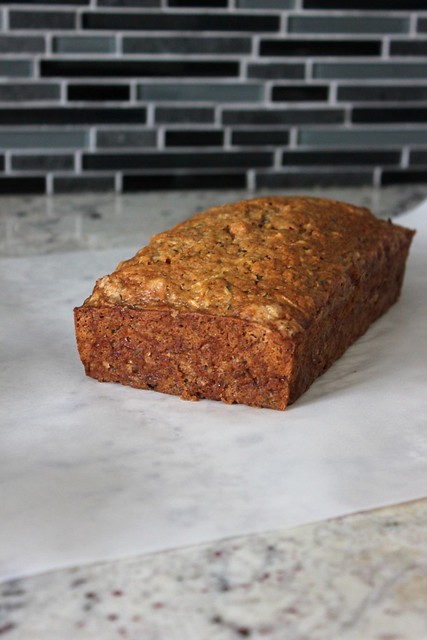 Let the zucchini breads cool, in or out of their loaf pans. Then slice and serve. You’ll love your next breakfast!

This recipe is adapted from Bob’s Red Mill.