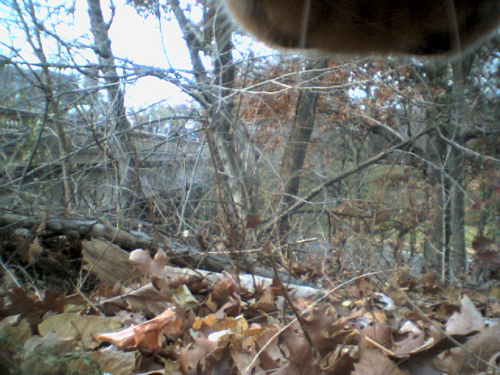 Stella took this picture last year. She has a doggie cam. It attaches to her collar and is set to automatically take a picture every minute or so. This is my favorite picture she snapped because her chin puts the shot into perspective. I love getting to see the world from Stella’s point of view! Just a few feet lower really makes a difference. I also like this picture because you can see Stella’s weird chin whiskers.

The puppy cam reminds me of an article I saw in a tabloid a few years ago. These people rigged a camera to their cat, and it took pictures on intervals all day, every day. The cat was allowed outside by itself, so the camera gave the people clues about what it was doing. The best picture in the article was one of a pair of human legs in the kitchen. I think the person was wearing a bathrobe. The legs really looked like they belonged to a woman, but they were the man’s instead. Ha. Suffice it to say, Stella will NOT be wearing her camera inside around me!