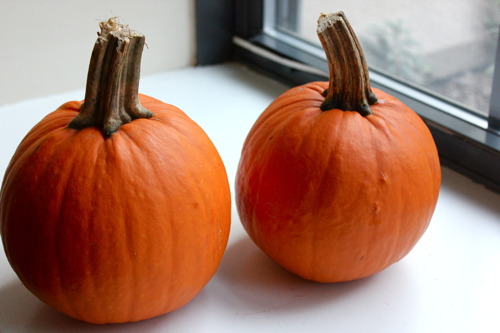 I really love using pumpkin, and I go through a ton of Trader Joe’s pumpkin purée cans. I’m not sure why the idea of making my own purée got stuck in my head, but I couldn’t stop thinking about it. Finally, I went for it. I guess I wanted to see whether the homemade stuff would be any different. I also wanted to experiment with the purée, so I steamed one pumpkin and baked the other. Fast forward to the end- there are minimally significant differences, and I’ll probably stick with the can. 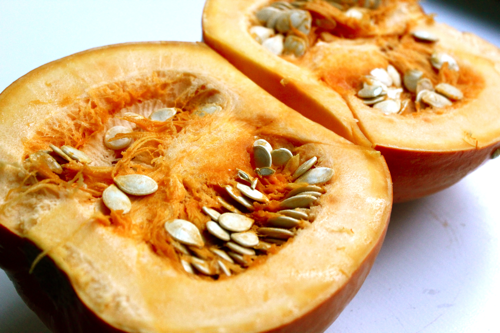 For the purée, it’s best to use pie pumpkins or sugar pumpkins instead of the larger jack-o-lantern pumpkins because of their flavor. The hardest part about making the purée is cutting into the pumpkins. These pumpkins had armadillo skin. For real (even after cooking, they formed perfectly hard bowls that would make a cute way to serve pumpkin pasta). It was easiest to get into them by cutting the top stems off and then slicing them in half. If you’re having a lot of trouble, a serrated knife can help. A David can also help. Then, scoop out the seeds (I like using a grapefruit spoon for this part), rinse them off, and save them to toast. 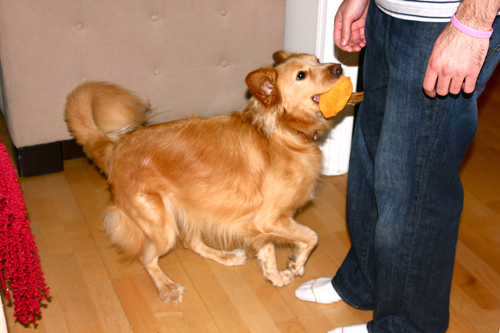 Stella came running as soon as I cut into the raw pumpkins. She even snatched one of the lids and ran away with it. What a Halloween doggie. 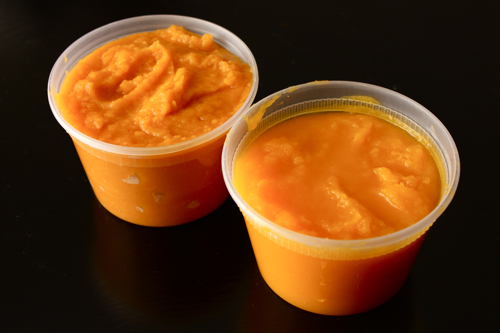 The steamed pumpkin (pictured on the right) had a brighter orange color and a smoother consistency. It also had more liquid in it. It looked and tasted exactly like the canned pumpkin purée. The can is a perfect substitute, and I probably won’t venture to make this purée again.

The roasted pumpkin (pictured on the left) had a darker orange color and a chunkier consistency. It was much drier, and I had to add a significant amount of water to the mixture so that it would even purée. The flavor was just perceptibly deeper than the steamed pumpkin’s flavor. The only reason I’d ever roast a pumpkin for a purée again is if I want to use it in a soup. I think its consistency would be much heartier and more rustic than the steamed version.

Now that I have a ridiculous amount of pumpkin purée on hand, expect to see some more pumpkin recipes here soon. I just made some pumpkin pasta! Although next, I’ll show you my method for toasting the pumpkin seeds.