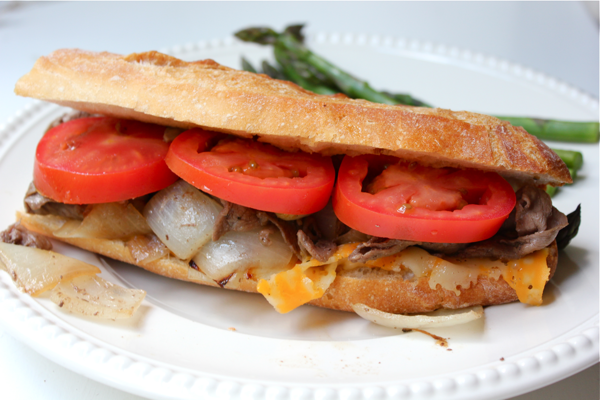 Philly cheesesteaks. I’ve never encountered something so delicious that is horribly impersonated so often. Cheesesteaks have certain qualities that just should not be changed. I can’t tell you how many times I’ve seen “Philly” cheesesteaks on a menu only to read that they come loaded with bell peppers and other twists that make me crinkle my nose. Cruise ships are the worst offenders. As much as I love authentic cheesesteaks, it’s rarely possible to make them with the right ingredients here in DC. My favorite cheesesteak order goes something like this: American cheesesteak hoagie with extra onions. Delicious. The soft, chewy hoagie roll is the best part, but they are virtually non-existent outside of Philadelphia. If you get a cheesesteak craving and have to make your own, it will probably be delicious but not as delicious as you know it can be. 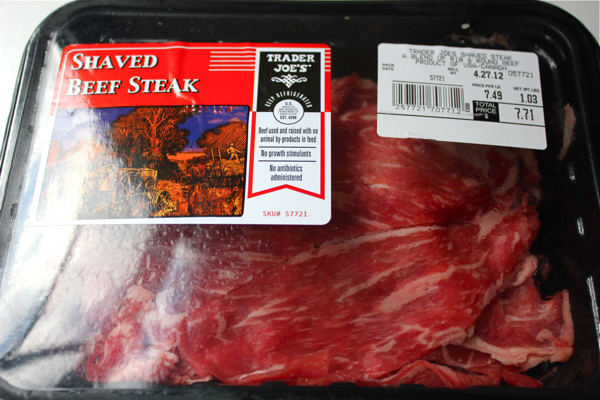 Aside from the roll, I think the beef is the next essential component to making a good Philly cheesesteak. I’ve tried cooking a steak and cutting it into thin slices… fail. I’ve tried Steak-umms… major, greasy fail. And then, I happened to notice Trader Joe’s selling shaved beef. I looked at it and thought, “Is this to make Korean bulgogi at home?” And then a few nights later, when I was trying to fall asleep, it hit me: CHEESESTEAKS! So I snapped up a package, and it works perfectly.

To make your cheesesteaks, start by cutting an onion into 1 inch pieces. Pour 1 tablespoon of vegetable oil into a pan, and fry the onions until they are translucent and brown. Transfer the onions to a side dish. 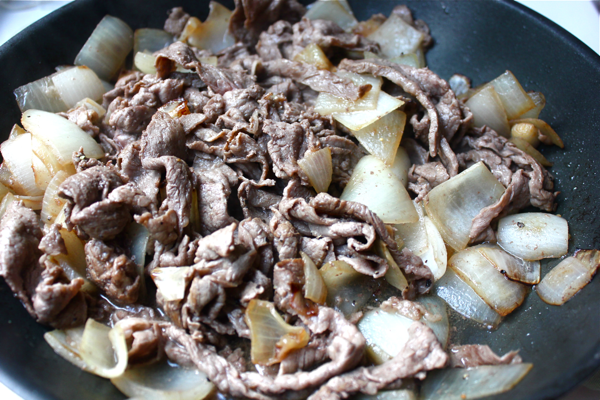 Add your beef to the pan, and toss it around until it browns. Try using a wooden spoon to break the meat up while it’s in the pan. If you’re using frozen shaved beef, you can break it up as you put it into the pan. Just as the meat starts to lose its last hint of pinkness, take the pan off of the heat and add in the onions. Taste the beef, and season it with salt and pepper if it needs it. 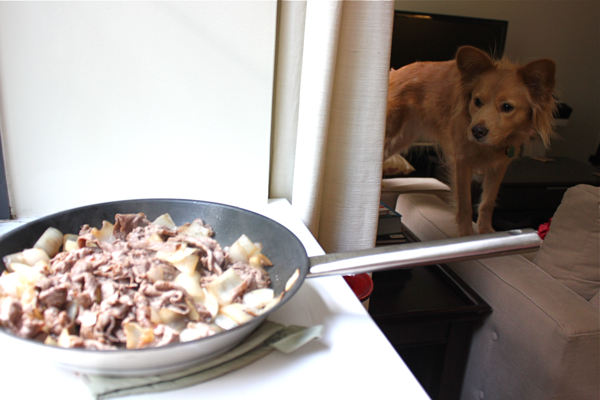 The beef and onions smell so good that little noses will come from near and far to sniff at it. 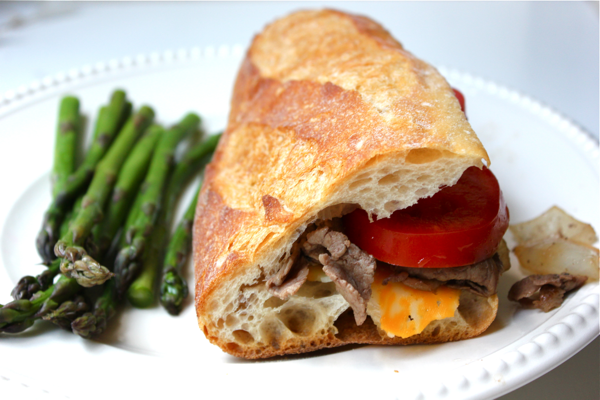 Slice your roll in half, and let it toast in the oven for a few minutes. I used a baguette, which was crusty and fine, but it just doesn’t compare to a real hoagie roll. Place a slice of cheese in the roll. I prefer American, but many people like Provolone. Add your steak and onions into the roll, allowing them to melt the cheese. If you want a cheesesteak hoagie, add some lettuce and tomato to your sandwich. Lots of people like adding ketchup too. My cheesesteak wasn’t the same as one I’d get from Geno’s, but it did a good enough job satisfying my craving. And, honestly, my steak was much less gristly.