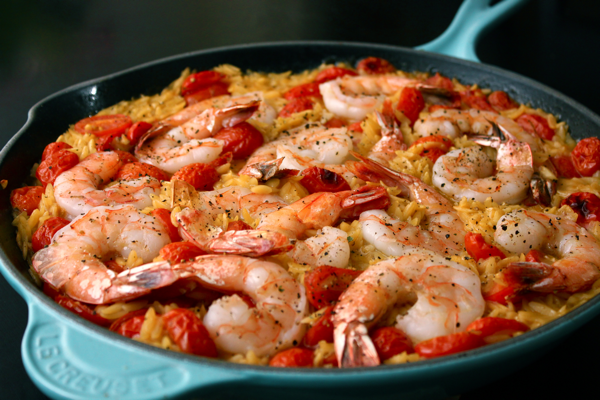 I love meals that only dirty one pot, and this recipe is great. The most difficult part of this whole meal is transferring the skillet to and from the oven. The easiest part- eating it, of course. I love baked pastas because they get a little crispy and chewy, but the flavors in this one are particularly delicious. Because everything gets cooked in the same skillet, the orzo really sucks up all of the flavorful juices, even those from the shrimp. The tomatoes burst and look beautiful alongside the pink shrimp, and I must admit that I’m a sucker for pretty food that tastes good. I’ll make this one again and again. 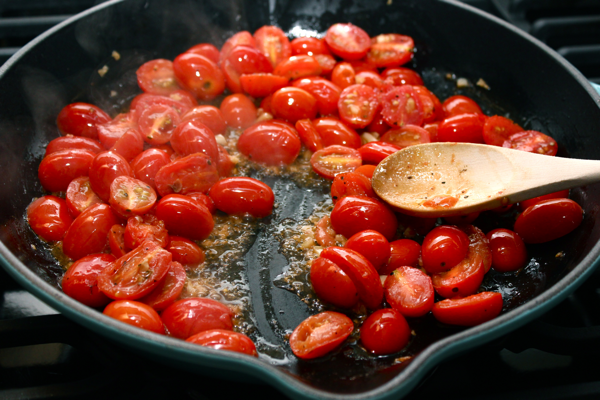 This is one recipe where I think it’s beneficial to prep  your vegetables ahead of time, so start off by mincing 6 garlic cloves and halving 1 pound of grape tomatoes. If slicing this many tomatoes one by one makes you nuts, use this trick I learned (probably on TV). Get two round lids from those plastic takeout containers. Place one of the lids on a table with its ridged side up, and layer on the tomatoes. Put the second lid down over the top of the tomatoes with its ridged side down. Press your palm down to flatten the lids together, and use a knife to slice horizontally across the center of the tomatoes (being careful not to cut yourself). Once the ingredients are prepped, preheat your oven to 400ºF. In a large oven-proof skillet, heat 4 tablespoons of vegetable oil over medium heat and then cook the garlic until it just starts to brown. Raise the heat and add the tomatoes. Cook them until they begin to soften. 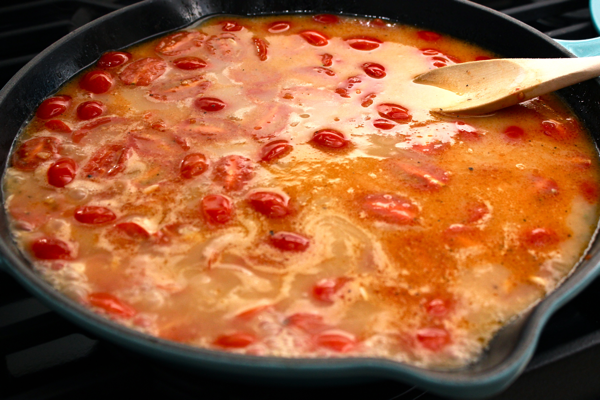 Add 3/4 pound of orzo pasta and 3 1/4 cups of low sodium chicken broth to the skillet. Stir everything around, and season with salt and pepper to taste. Bring the broth to a simmer, and then cover the skillet either with tin foil or an oven-proof lid. Transfer the skillet into the oven, and cook it for 10 minutes. While it cooks, defrost 1 pound of cleaned shrimp. 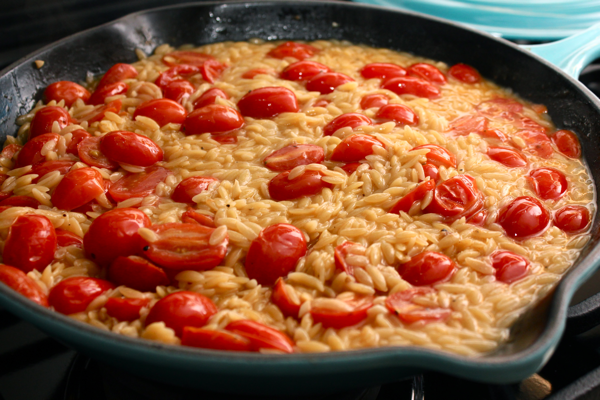 Remove the skillet from the oven, and stir. The pasta should have absorbed most of the liquid, but it should still be a little wet. Nestle the shrimp into the pasta, and drizzle some olive oil over the top. Garnish the shrimp with some more black pepper. Turn the broiler on in your oven, and then broil the shrimp for 4 minutes or until they are opaque. 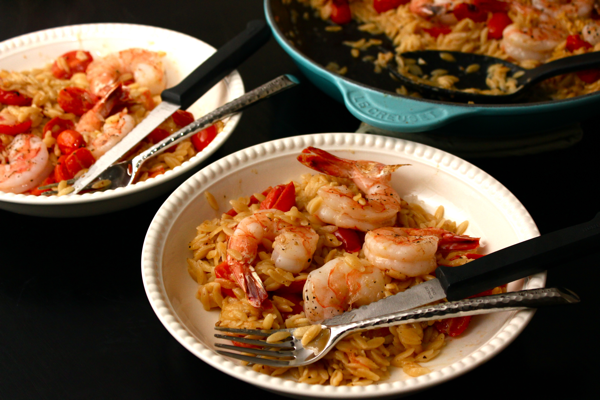 Once the pasta has stopped bubbling, feel free to garnish it with some fresh basil. I thought I’d want parmesan cheese, but the flavors really didn’t need anything extra. Serve and enjoy this easy meal, and then fly through cleaning your dishes.

This recipe is adapted from Martha Stewart’s Everyday Food magazine.