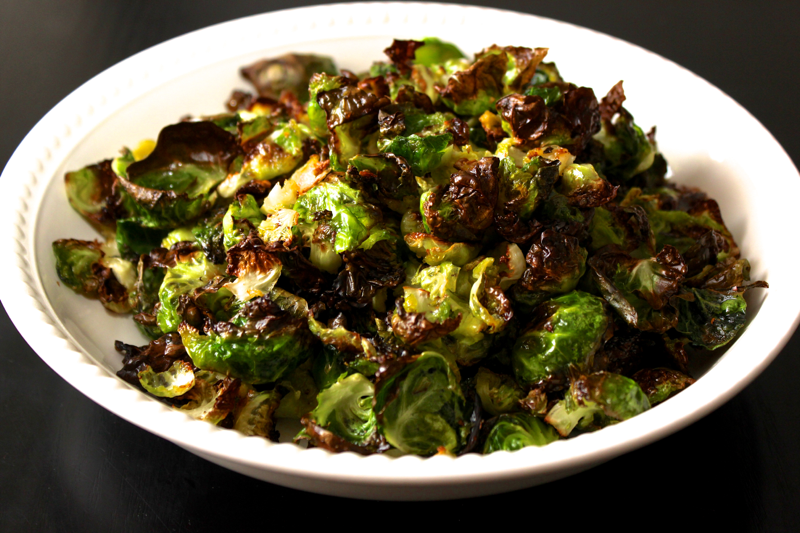 This recipe makes my favorite brussels sprouts of all time! Around the time of the great apple haul of 2013, I dined at Zentan and ate the best brussels sprouts I had ever encountered. The brussels sprouts were peeled down into their individual leaves, likely flash fried, and served bejeweled with thin slices of spicy red peppers. They were so incredible that we placed a second order for them and noticed other tables doing the same. I HAD to recreate those sprouts at home. 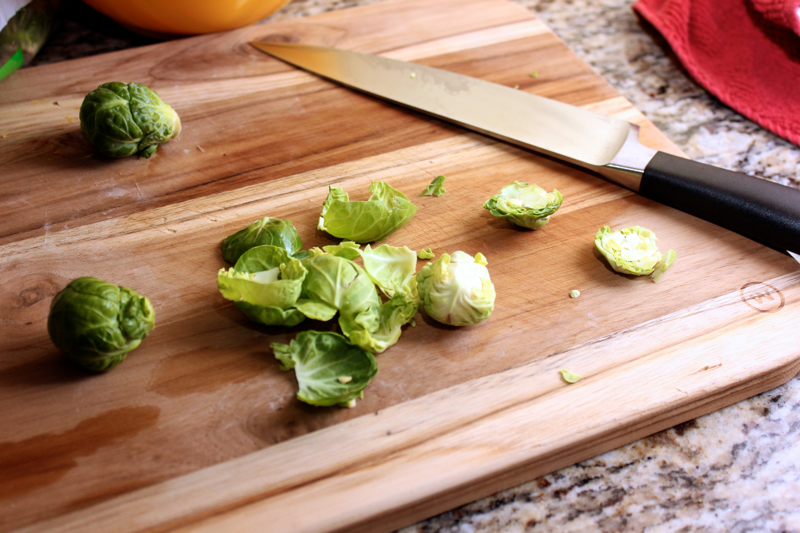 To make these crunchy sprouts, preheat your oven to 400º F. Then, the first step is the most tedious- peeling the leaves off of all of those brussels sprouts. I have no idea how the restaurant has the resources to devote to peeling enough sprouts to feed the crowds that clamor for them, but the effort is certainly worth the result. Here’s my preferred peeling method: cut off the bottom of the sprout where the leaves attach, and then use your fingers to remove the leaves from their loose bottom ends. Because the leaves are layered on, you’ll likely have to cut the bottom of each sprout off several times as you make your way toward the center. It’s a nice, mindless, and almost meditative task. As you peel, put all of the leaves into a bowl. 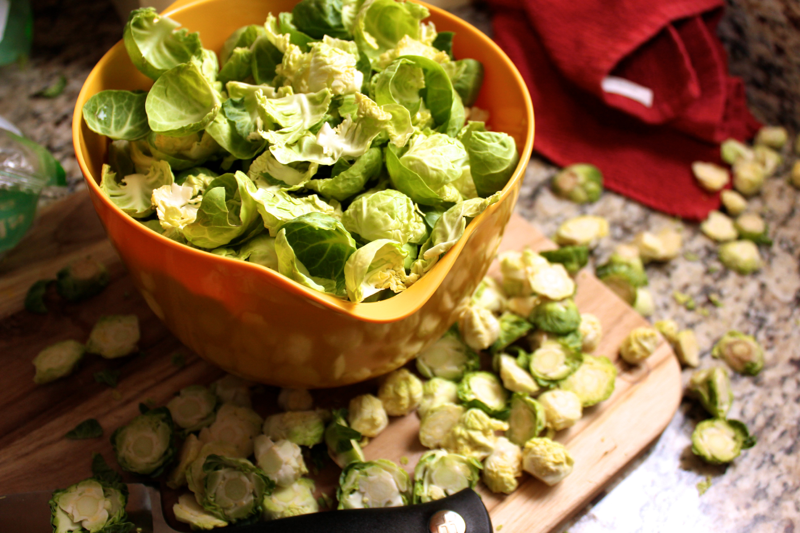 Once all of the leaves are collected, drizzle some olive oil into the bowl. Use a spatula to toss the leaves around until they are evenly coated. 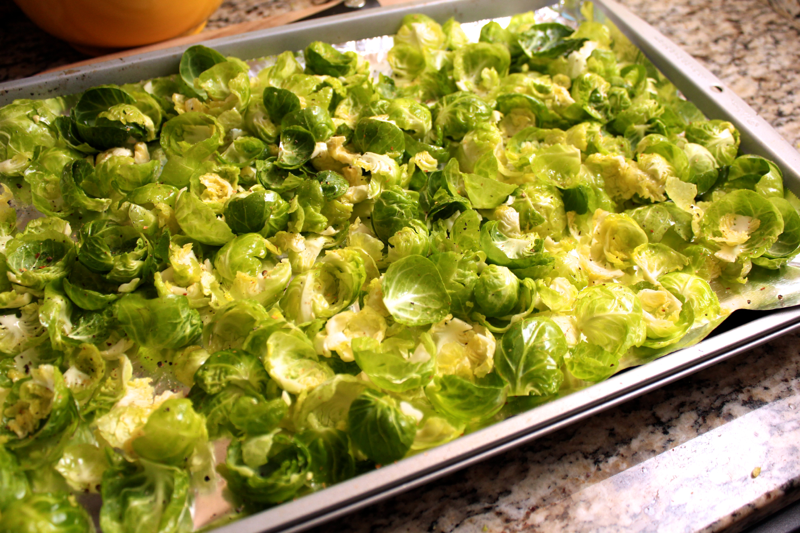 Spread the leaves in a very even layer on a baking sheet, and then season the brussels sprouts with salt, pepper, and red pepper flakes for a little spice. 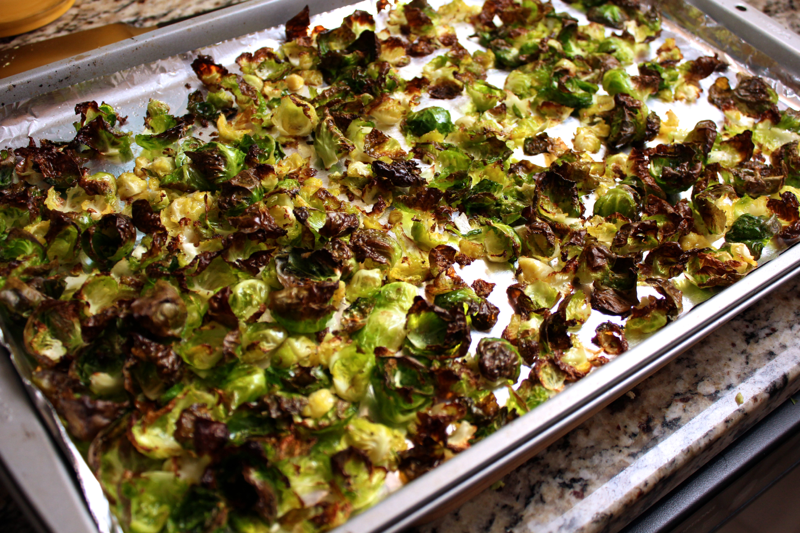 Put the pan into the oven. After about 5 minutes, rotate the pan around. After another 5 minutes, take a look at the sprouts. Most of the edges should be somewhat browned and the rest of the sprouts should have turned a bright green. Taste a leaf and you will discover that it is not totally crispy. Toss the brussels sprouts to redistribute the leaves. Cajole them back into an even layer, and bake them for another 5 minutes or so until you taste a leaf and it is completely crisp but not burned. 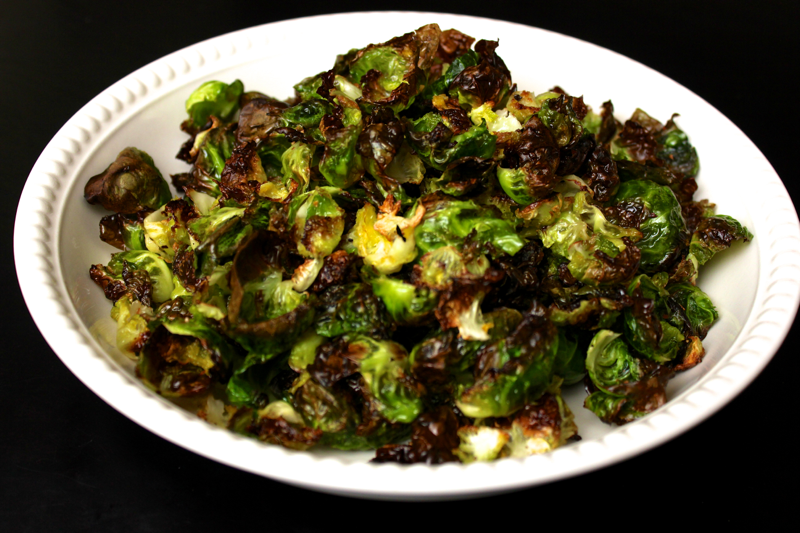 Transfer the brussels sprouts into a serving dish, and eat them up while they are still warm. These sprouts are so addictive and their crunch is primally satisfying. I don’t know how I’ll ever go back to eating halved brussels sprouts ever again. I know you’ll love these!