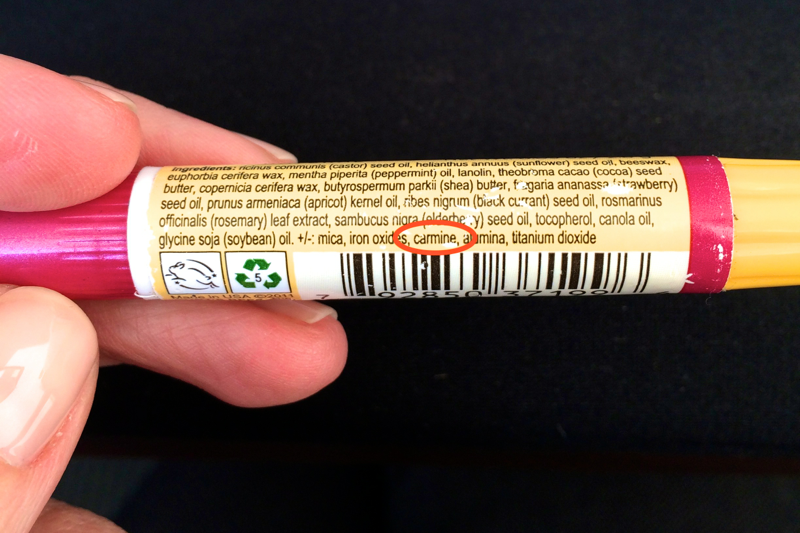 Several months ago, I stumbled across an article discussing the use of carmine as a coloring in cosmetics. I had never heard of carmine before, but it turns out that carmine is a substance derived from bugs. More specifically, a variety of beetle. The bugs are typically farmed, and then they are dried up, ground up, and boiled up until they produce a rich, red coloring. The coloring is used in all kinds of things- food, clothes, makeup. Blech. I grabbed my nearest red-colored product and inspected the ingredient list, and there it was…carmine. I haven’t used this lip balm since I read the article and have consciously avoided inspecting the ingredient lists on my other red products. I’d rather not know.

I am not sure how I feel about using products with carmine in them. Some people might object to using the ingredient because they believe that animals shouldn’t suffer for our products, but that concern doesn’t stop me from enjoying other animal-derived products like meat, leather, or silk (as I learned in Thailand, silk worms are farmed and killed much like the beetles, but the worms don’t end up in the final product). Still, in this case, the bugs’ contribution of coloring to the product is pretty minor because the product could always be formulated differently. Meat, leather, and silk, on the other hand, cannot be modified to exclude the animal-based component, nor do synthetic imitations completely reproduce the unique properties of the real deal. My main concern with using carmine is as follows: Ewwww, bugs…on my lips! But on the other hand, the bugs are so processed that the red coloring is pretty far removed from its original status as a creepy crawly: less ewww? I’m not sure where I come out on this one, and I’d love a rationalization that would allow me to resume using my pretty, red lip balm. So what do you think: yay or nay on carmine?