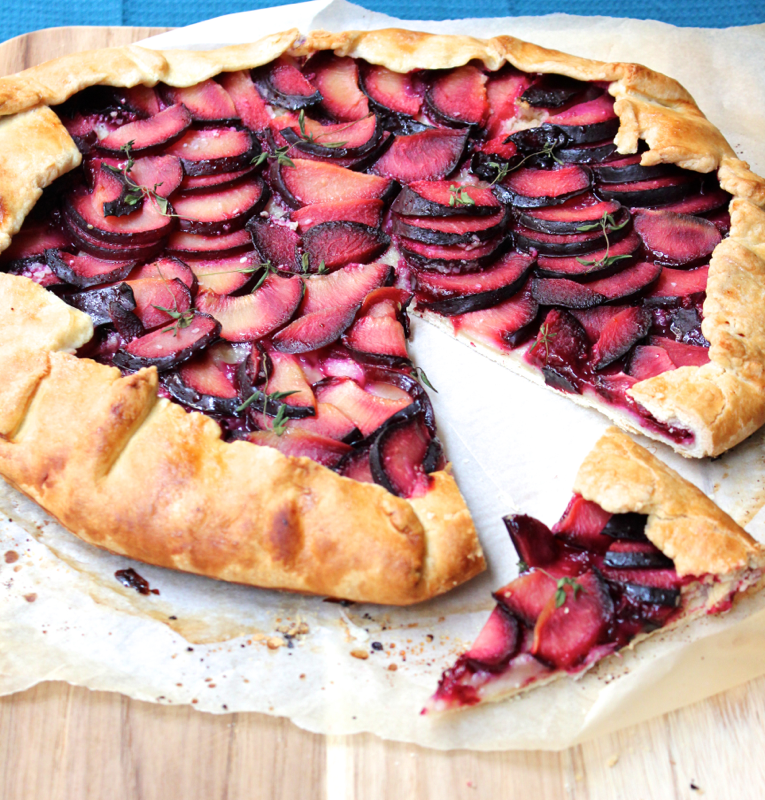 This summer has provided some delicious, beautiful fruit. Cooked fruit doesn’t always look prettier than its fresh counterpart, but this rustic plum galette is an exception. A galette is a cross between a pie and a tart, and it’s easier to make than both. It’s easier to eat too- this one can be sliced and eaten like a pizza. So buy some plums in bulk and get baking! 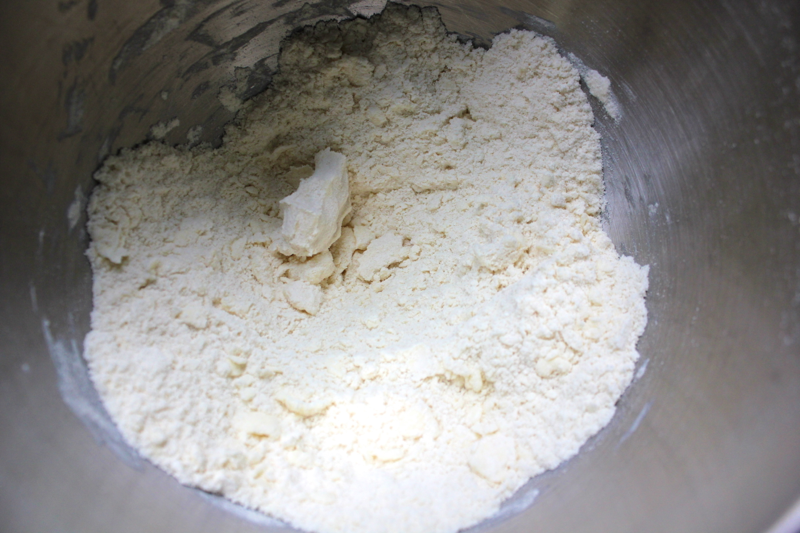 Start with pie crust. To make it, add 250 grams of flour, 125 grams of cold, cubed butter, and 4 grams of salt to the bowl of a stand mixer. Use the paddle attachment to combine them until the largest butter pieces are still visible, but so that if you squeeze the mixture in your hand, it mostly holds the shape of your fingers. If you don’t want to use a mixer, you can also combine the flour and butter in a food processor (but it goes fast!) or by hand with a pastry cutter (but it goes slow!). With the mixer running, slowly pour in ice cold water (straining out the ice cubes) until the dough comes together around the paddle, and then stop mixing and stop adding water. If you add too much water, the dough will be too sticky, and if you mix it too much, it will get tough. 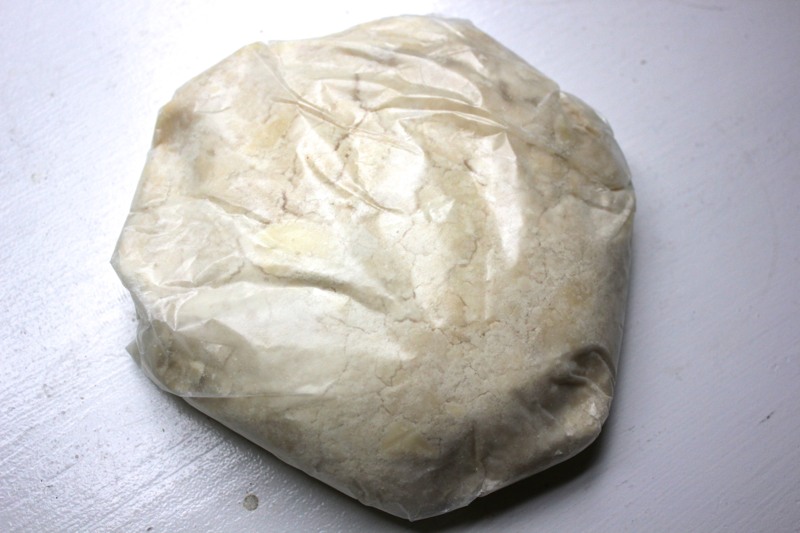 Turn the dough out onto a work surface, and pat it into a disk with your hands. Do not knead the dough. Some spots of the dough might be wetter than others. Wrap the dough in wax paper, and refrigerate it for at least 30 minutes or up to a day. Resting will allow the moisture in the dough to distribute evenly. 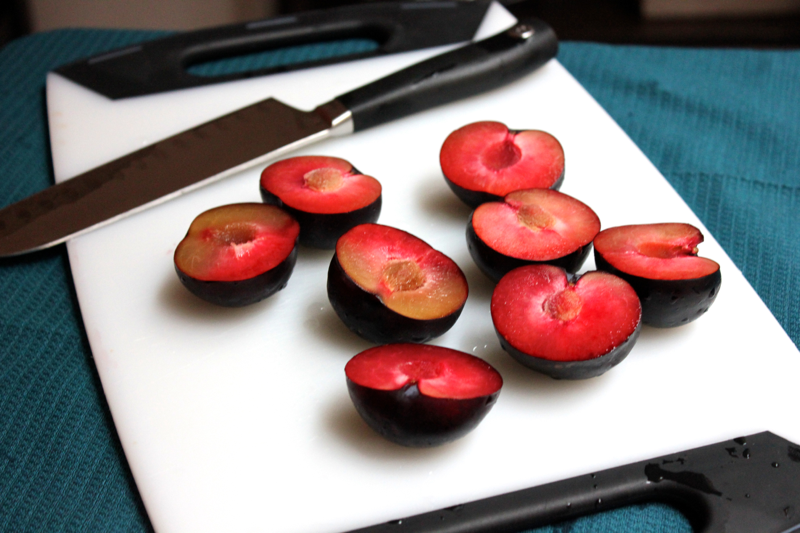 While the dough rests, slice your plums. I needed 5 to fill my galette. Cut the plums in half, remove their pits, and then slice them thinly.

In a small bowl, stir together 1/3 cup of almond flour, 1 tablespoon of all-purpose flour, and 3 tablespoons of sugar. If you don’t have almond flour, you can process 1/3 cup of almonds in a food processor until they form fine crumbs. Then, lightly flour a flat surface, and roll out the pie crust into a circle. The crust should be about 1/2 centimeter thick. Transfer the pie crust onto a baking sheet lined with parchment paper. 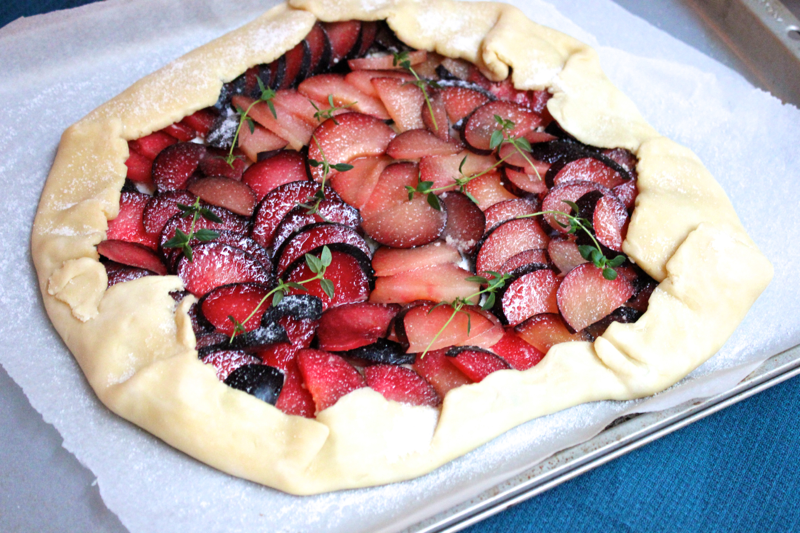 Spread the almond flour mixture over the pie crust, leaving a 2-inch border around the edges. The flour mixture will prevent the crust from getting soggy with plum juices and provide a subtle almond flavor. Then, layer over the plum slices and fold up the edges of the pie crust. Put the galette into the refrigerator to firm up again before baking. 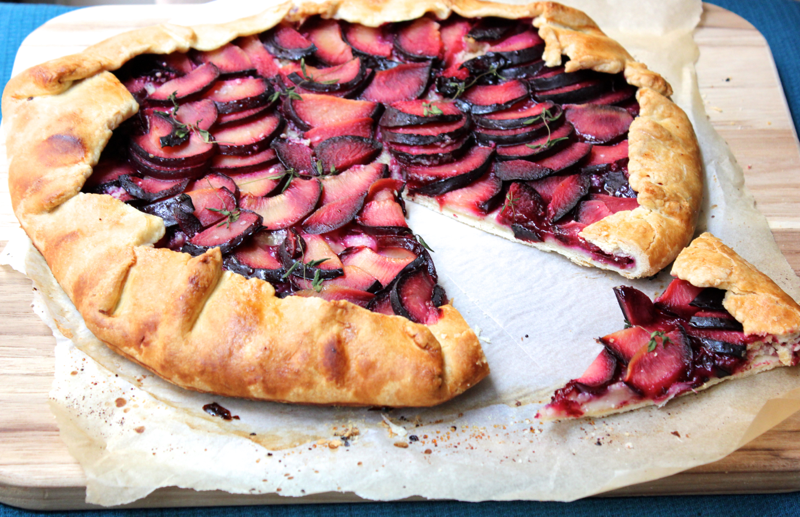 Heat your oven to 400° F. Then, take the galette out of the refrigerator, and brush the exposed crust with milk. I know it sounds crazy, but the milk gives the crust a nice golden color. Then, sprinkle 1 tablespoon of sugar over the whole galette (plums and crust). Place a few sprigs of thyme on top of the plums. Then, cut up 2 tablespoons of butter into small cubes, and dot them around. Bake the galette for 40 to 50 minutes until the crust is golden brown. Allow the galette to cool before slicing so the plums don’t lose all of their juices. This galette is mildly sweet but very tasty!

This recipe is adapted from the Pastry Affair.