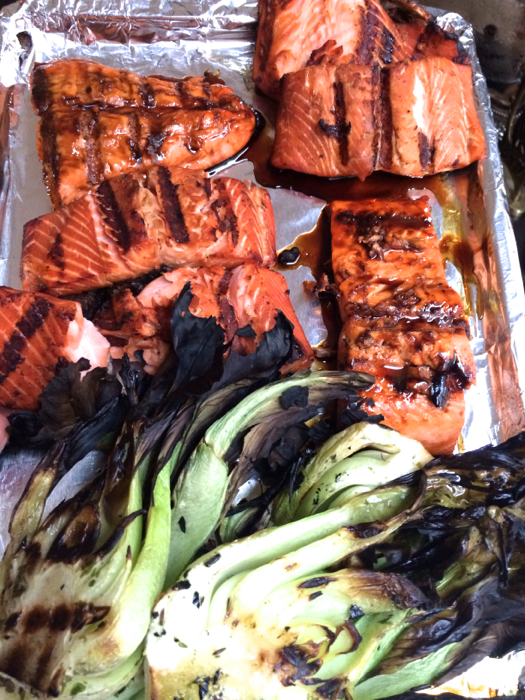 After too many years without access to a grill, I am finally learning how to cook in the great outdoors. Whole Foods recently had a great deal on salmon, so I bought a large filet and set off experimenting. I marinated some of the salmon in a mixture of soy sauce, sesame oil, grated ginger, and miso for about 20 minutes before grilling it. I put the marinated salmon on the grill while it was still wet, and it cooked just fine. Other salmon, I cooked plain, and then brushed it with teriyaki sauce twice, once after flipping it on the grill and again after removing it from the grill. Both methods were delicious and flavorful! I’d use them both again.

My most important finding of the experiment is that it’s best to grill fish skin-side down first. It made flipping the fish much easier, and all of the salmon released cleanly when it was time to take them off of the grill. Grilling the flesh side first resulted in some pieces of salmon sticking to the grill and breaking off when it was time to flip them. My guess is that cooking with the skin-side down first allowed the rest of the salmon to firm up and hold together better.

As for cook times, my indoor knowledge translated well to the grill and didn’t require much experimentation. We let the salmon cook on the first side until the tops just turned opaque, then we flipped them and let them cook for another 1-2 minutes. After the salmon had a chance to rest, each piece was moist and juicy and retained its pink center. From now on, I’ll feel much more confident grilling full-priced fish!