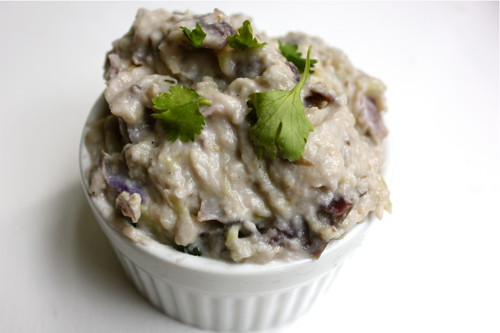 Baba ghanoush is a totally delicious eggplant dip, and it is really easy to whip together. When the creamy eggplant is flavored with olive oil, lemon, cilantro, and sesame, it turns into a healthy, tasty, and surprisingly filling snack. I’ll definitely be nibbling on it during the next football game. 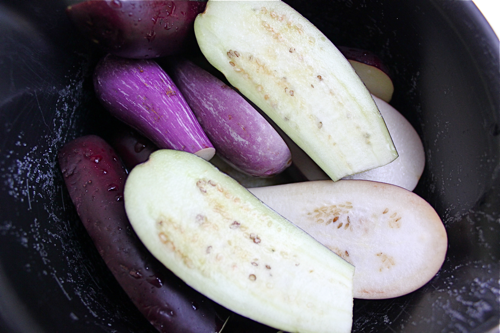 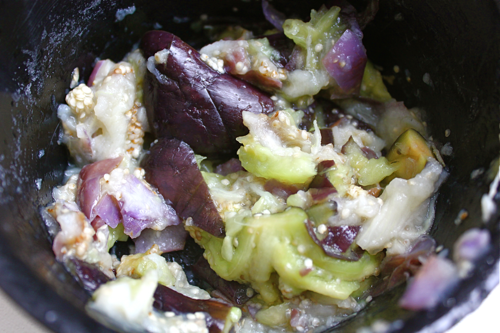 If you use a full-sized eggplant, you will want to scoop the insides out of the skin. My eggplants had thin skins because they were so tiny, so I left them on. I liked how colorful the skins made the final dip look. You can make your baba ghanoush in the food processor, but if you’re like me and don’t feel like creating a lot of dirty dishes, you can mash the eggplant by hand in a bowl. Run a sharp knife through the eggplant until it’s broken down into much smaller pieces. Don’t worry- it will take on a creamier consistency once you stir in the other ingredients. 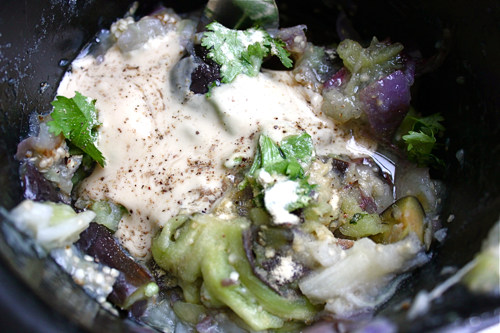 Now it’s time to season your eggplant. Drizzle in about 1 tablespoon of olive oil, some cilantro leaves, the juice from 1/2 lemon, 1 teaspoon of garlic powder, and 1 teaspoon of tahini. Tahini is sesame seed paste. I’ve made my own tahini before, but I definitely recommend buying it from the supermarket instead. Also season the baba ghanoush with salt and pepper. Stir the baba ghanoush well with a fork and taste it. Adjust your seasonings until the dip takes on the flavor you want. Eat your baba ghanoush with plantain chips, pita chips, veggies, or as a spread on a sandwich. I hope you enjoy this quick snack!