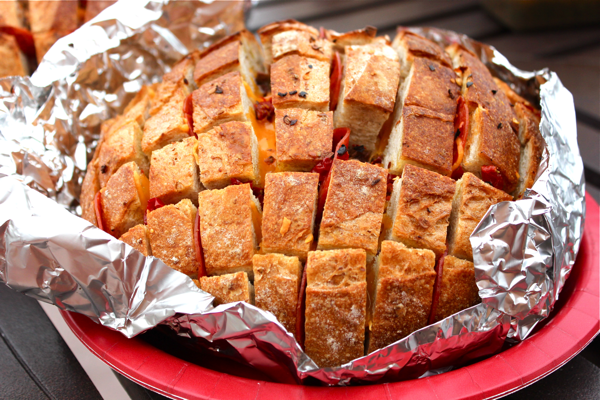 I came across the idea to make pull-apart bread online, and I instantly knew that it was an easy way to recreate the delicious “special” bread from an Italian restaurant back home. Their bread has cheese, long hot peppers, olives, and meat baked into it to create a delicious pre-meal feast. Here is a shortcut to that wonder: Buy an already-baked loaf of bread, cut it open, stuff it with goodness, and heat it until it’s gooey. 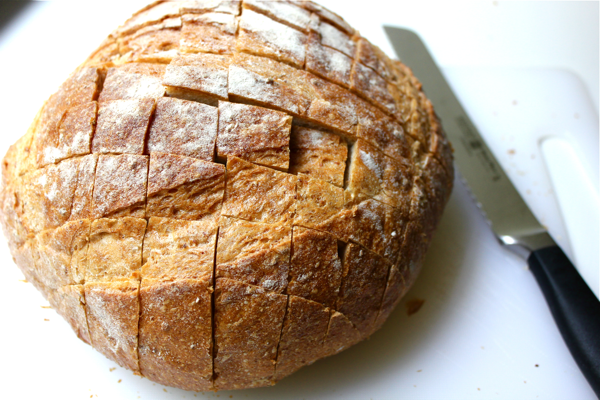 To make a loaf of this pull-apart party bread for yourself, get a loaf of pain de campagne or another dense bread. Using a bread knife, make parallel slices that are 1 inch apart almost down to the the bread’s bottom crust. Don’t cut all the way through the loaf. Then, turn your bread 90 degrees, and make 1 inch slices going the other way. This cutting will create vertical bread sticks that can be stuffed and then pulled out individually. Preheat your oven to 350ºF. 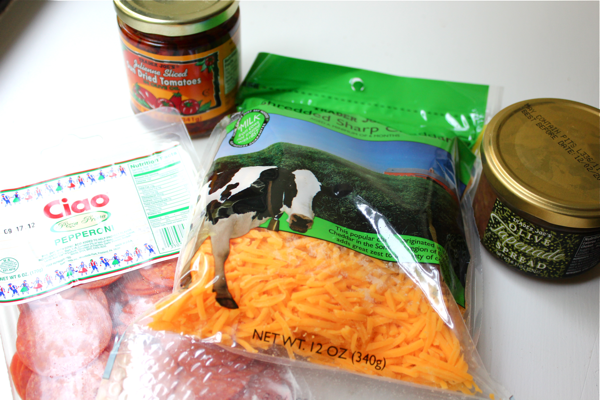 Choose 4 items that you want to use to stuff the bread. If you stuff one item down every other slice in each direction, then each bread stick you pull out will have a different stuffing on each of its 4 sides. I definitely over-thought this process, but it paid off in flavor. I chose pepperoni, cheddar cheese, olive tapenade, and sun-dried tomatoes so the bread would have a nice balance of spicy, sweet, and salty. 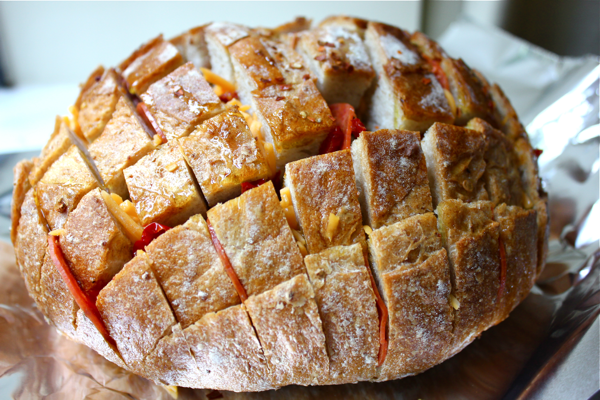 Start stuffing your bread with the ingredients. Going one way, I did alternating slices of tapenade and tomatoes. Going the other way, I stuffed alternate slices with the cheese and the pepperoni. If you’re using pepperoni or another large item, make sure to do it last so that it doesn’t get in the way of the other items you’re trying to stuff in. I found stuffing the bread to be mindlessly therapeutic. Once the loaf is stuffed, generously drizzle the whole thing with olive oil. Let the olive oil get down between the cracks and soak in well. 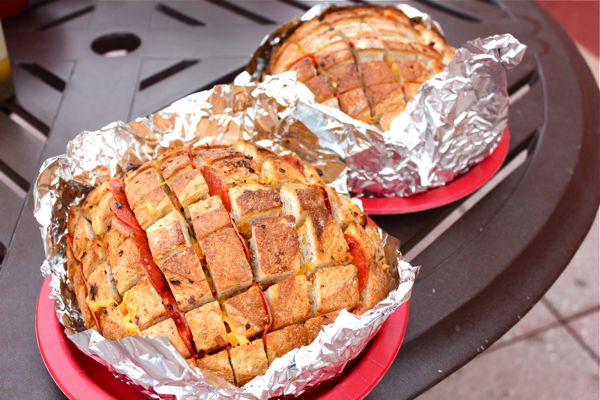 Bake the bread for approximately 10-15 minutes or until the bread is toasty and the cheese is completely melted. I don’t recommend baking the loaves on a BBQ grill because the grill could get too hot and toast the bread before the insides melt. Once the bread is done, generously sprinkle it with red pepper flakes and lots of freshly copped chives. I’m looking forward to making this one again- it’s great to pick at over a few glasses of wine on a breezy rooftop.