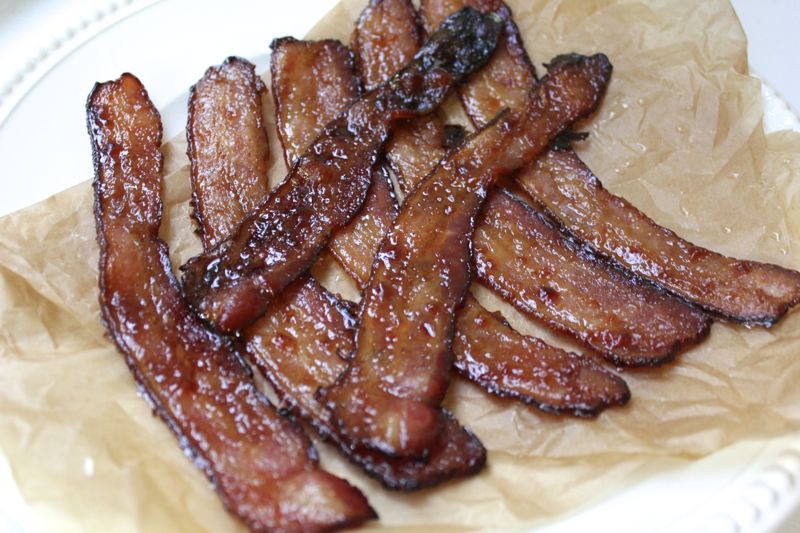 This bacon is one of the most delicious things I’ve ever eaten. The bacon, dunked in a mixture of maple syrup and cayenne pepper, gets baked until it is crispy and candied– I just don’t have the adjectives to do it justice. I first made it intending to grill the bacon, but an unexpected thunderstorm forced me to use the oven instead, and I’m telling you, it was divine intervention. I made the bacon a second time for David, and he loved it but could only handle about one slice of the bacon’s richness. So when I was propositioned to co-host a brunch for my bacon-loving friends from the dog park, I knew that this new revelation had to be in the spotlight. I made a ton of bacon, and every piece got eaten- some with the eggs and some with dessert. 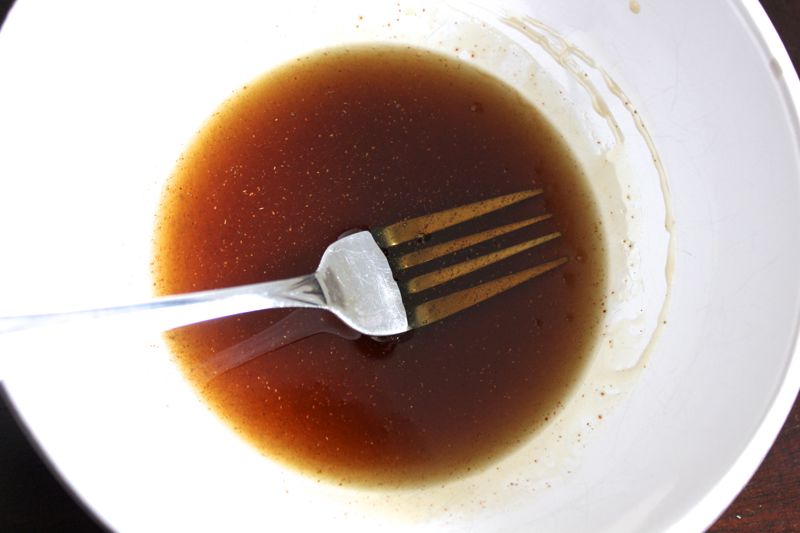 To make this amazing concoction, preheat your oven to 400º F. Whisk together about 1/4 cup of maple syrup and 1/2 teaspoon of cayenne pepper. If you’re making a lot of bacon, it helps to use a bacon-shaped mixing container, like a loaf pan. Taste the mixture and adjust it until you get the sweet and spicy balance you prefer. If you’re making a lot of bacon, you can scale the measurements upwards. 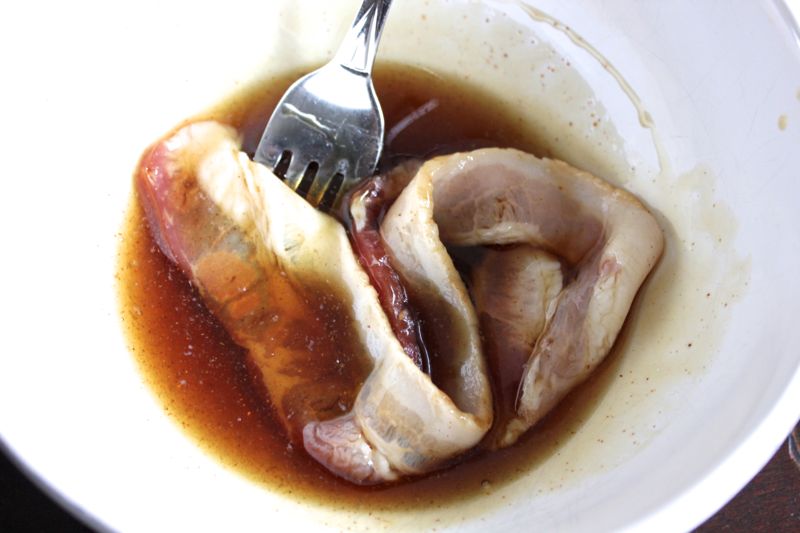 Line a baking sheet with foil, and mist it with cooking spray to prevent the bacon from sticking. Get some thick-cut pieces of applewood smoked bacon, and dip them, one by one, in the maple syrup. Once the bacon is coated, let the excess maple syrup drip back into the bowl, and place the bacon on the greased baking sheet. 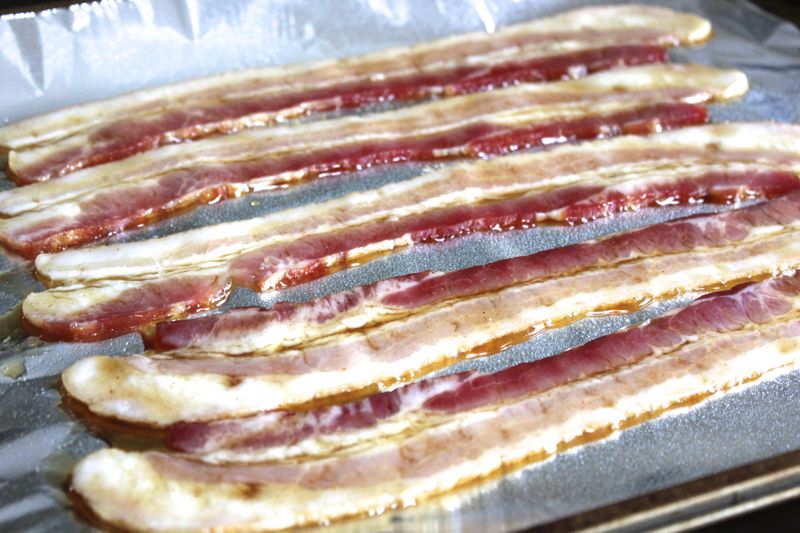 Repeat the process with the rest of the bacon strips. You can jam as many strips of bacon on one baking sheet as you can without letting them overlap. 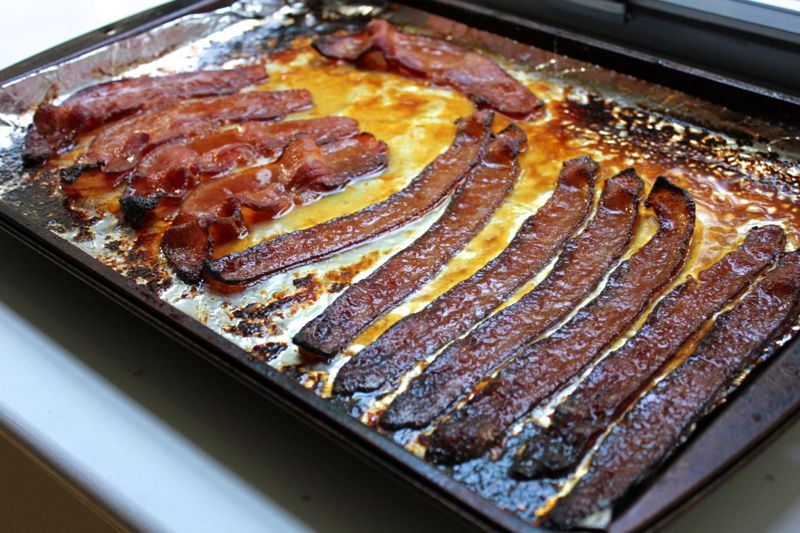 Bake the bacon for approximately 16 minutes, rotating the pan around half way through for even crisping. The bacon is done when the edges have browned. 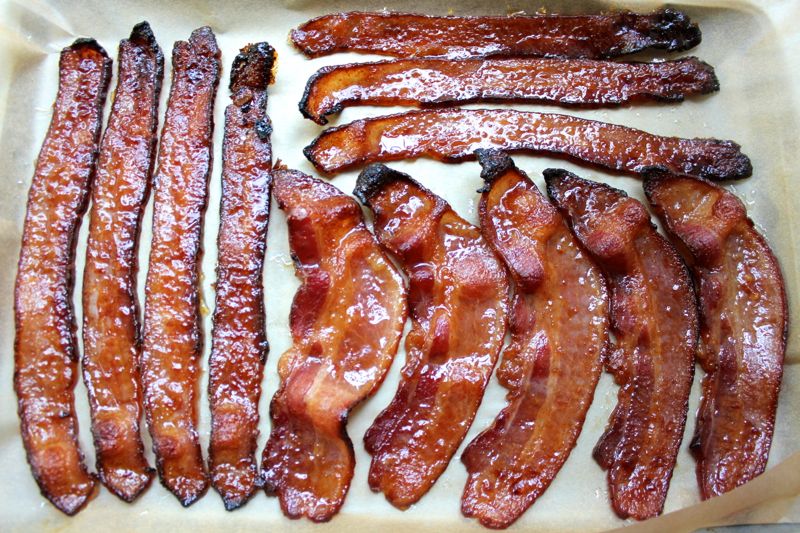 Remove the bacon from the oven, and let it cool slightly. Pick up the pieces of bacon, and let as much grease as possible drip off. You can’t drain this bacon on paper towels because the glaze will stick. Transfer the bacon to a parchment lined sheet, and serve it warm. If the bacon cools too much, the excess bacon grease will start to harden and become unattractive. And then gobble this bacon up before someone else does! It is sweet and smoky, with a faint hit of spice at the end. I dare you to stick to one piece! 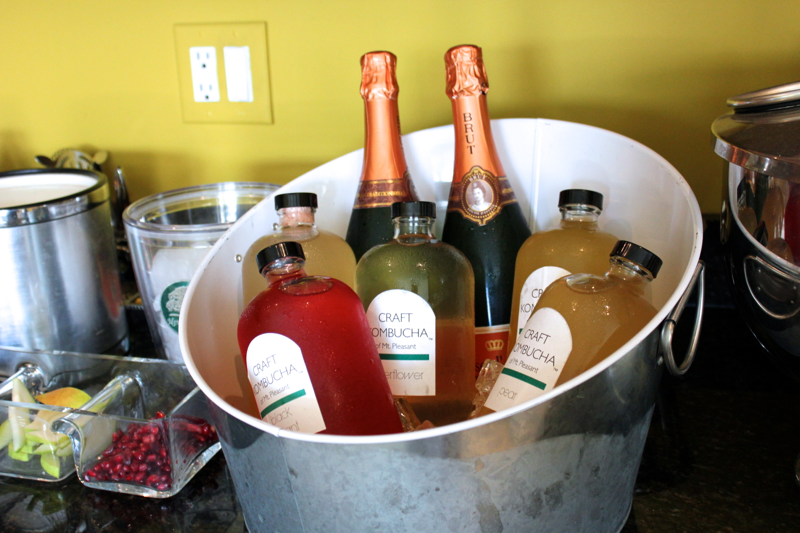 And I promised you some details on the awesome dog park brunch, so here you go! The amazing host made traditional eggs benedict and eggs florentine over the most beautiful tomatoes I’ve seen all year, along with a very delicious hummingbird cake with candied flowers! Our other co-host makes the best tasting (and smelling!) kombucha, and just launched her own company called Craft Kombucha. She prepared really fun cocktails, including black currant kombucha with champagne and a pumpkin spice kombucha with rum. Delish! I brought a few things you might have read about lately, including crab quiche, a potato frittata, espresso-nutella sticky buns, and THIS BACON! I also brought along an amazing salad that I’ve made a million times but have always forgotten to photograph to share with you. I’ll remedy that situation. Also, the aroma of maple glazed bacon has sadly dissipated from my kitchen, so I’ll have to remedy that situation too 🙂