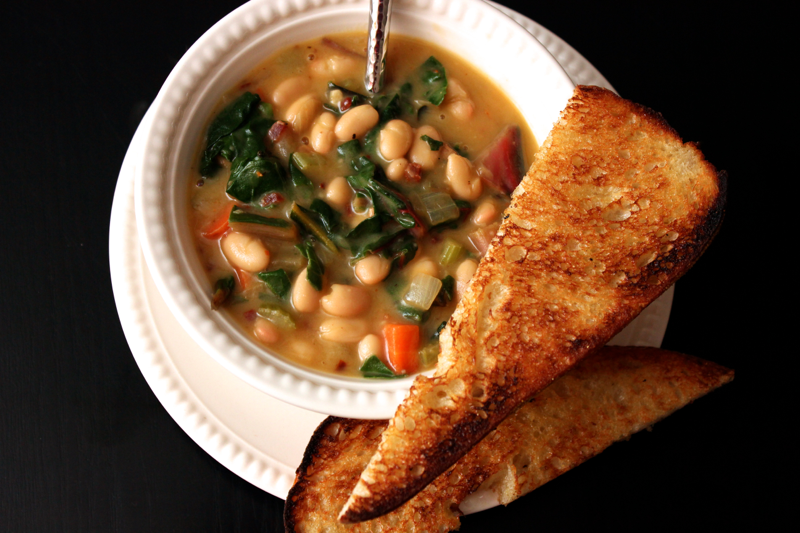 I love the recipe I use to make golden pot pies with pancetta and veggie stew. But making the pot pie crust, rolling it out, and baking it takes a lot of time. Time I just don’t have during the week when I otherwise want to eat the delicious and hearty stew that the pie crust usually encases. So I ditched the whole pot pie aspect and turned the recipe into a 30 minute weeknight meal. Instead, I made crostini by brushing some sliced Italian bread with olive oil on both sides and then broiling the bread on both sides until it was crisp. I used the crostini like a spoon to scoop up the stew, and it was delicious. Not as impressive, or special, or fun as the pot pie version, but delicious and fast.

I have taken other cooking shortcuts this week too. I bought a pre-marinated tenderloin roast from Trader Joe’s that I seared and then roasted, and it was great! I’ve never cooked such a large piece of meat before, but I definitely will again. I’d prefer to make my own marinade next time, but it’s not feasible when I don’t plan ahead for it.

Are there any weeknight shortcuts that you take to make dinners easier? Or do you plan your meals ahead of time and get your preparation done on the weekend? Are there any meals, like the pot pies, that you can make either simply or elaborately depending on the time you have available?