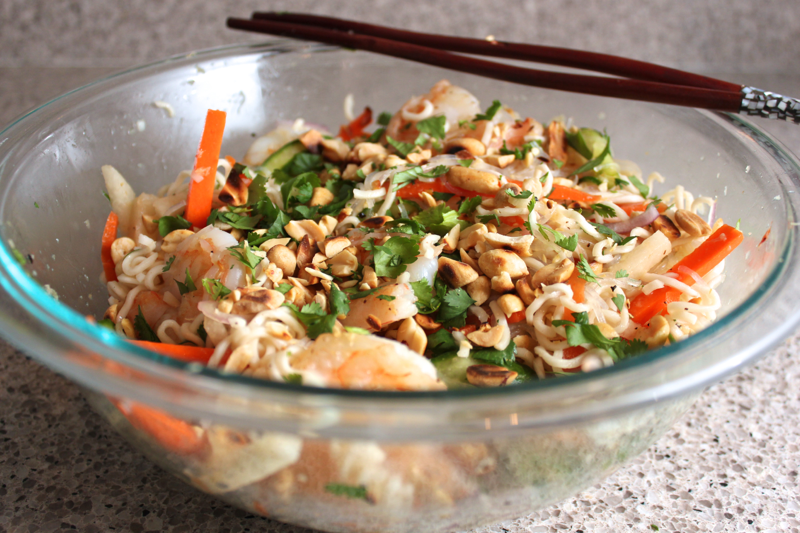 This crunchy, savory, spicy noodle salad is so refreshing that it is sure to become a summer standby recipe for post-pool lunches and too-hot-to-turn-on-the-oven night dinners. Sautéed shrimp make a main course out of what otherwise could pass as an appetizer or side dish. Knife skills are all it takes to turn out this delightful bowl of Thai-flavored confetti. We scarfed this salad down and felt satisfied and healthy! 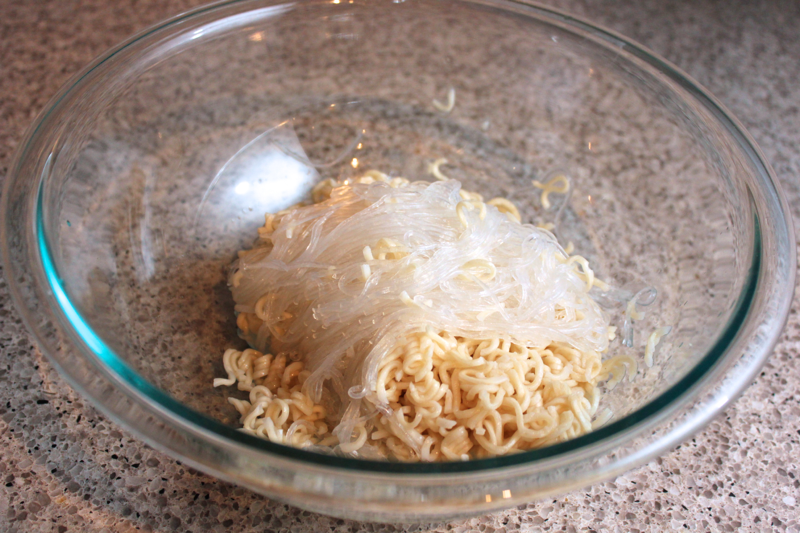 To make a main-course salad that serves 2-3 people, begin by preparing the noodles. The original recipe called for bean thread (aka cellophane or glass) noodles, but I didn’t have enough of those to fill out the entire salad, so I supplemented with a block of ramen noodles. Regardless of which noodles you select, cook 4 ounces of them according to their package’s instructions. Likely, you’ll pour boiling water over the noodles and let them soften. Once tender, drain the noodles, run them under cold water, and then set them aside in a large salad bowl. 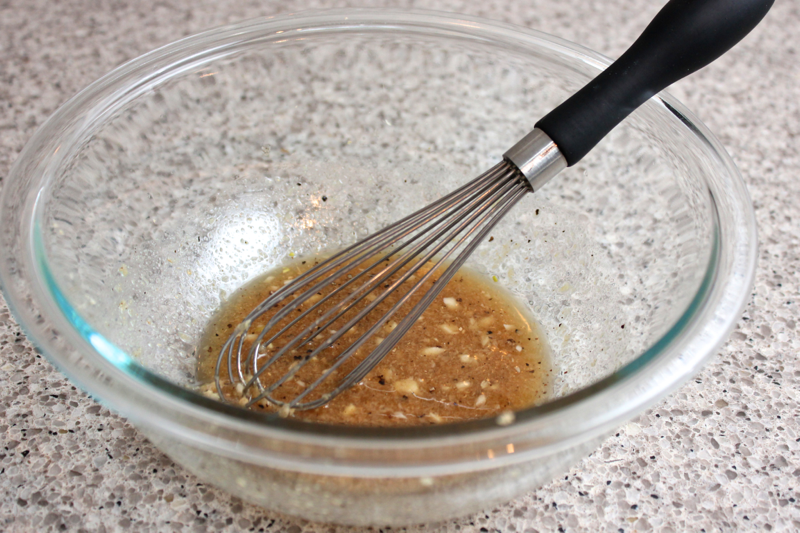 While the noodles soften, prepare the dressing. To a medium-sized bowl, add 1/4 cup of fish sauce, 3 tablespoons of lime juice, 2 tablespoons of rice vinegar, 1 tablespoon of sugar, and 1/4 teaspoon of black pepper. Into the bowl, grate 2 teaspoons of ginger and 1 garlic clove. Whisk the ingredients together, taste the dressing, and adjust any components to your liking. 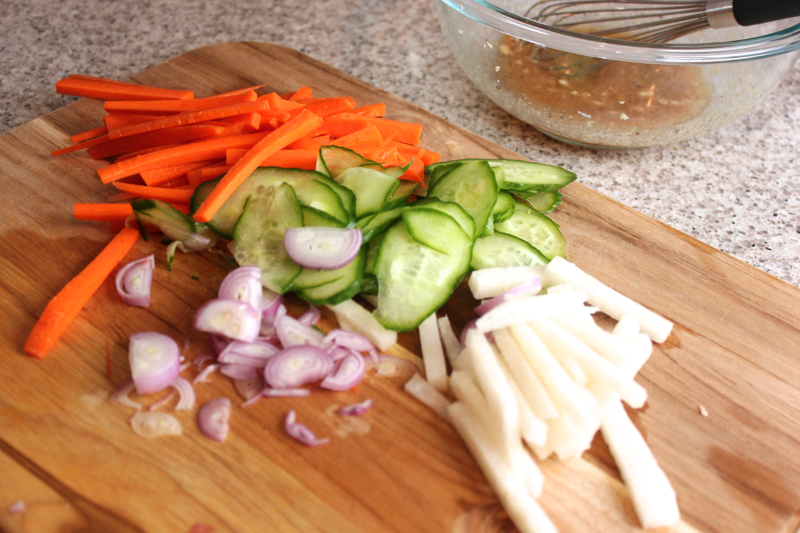 Your knife skills will really come in handy when preparing the vegetables for the salad! Thinly slice 1/2 of an English cucumber (the long, seedless kind). It’s easiest to get thin slices with a knife if you shave the cucumber on the diagonal. Otherwise, use a mandoline. Julienne (cut into matchsticks) 1 large carrot and 1/2 cup of radish, preferably daikon. Obviously, Trader Joe’s didn’t sell a daikon radish, nor did they sell regular radishes. Oddly, however, they did have jicama. I used the jicama instead of the radish because it has a similar texture, but to replace some of the radish’s heat, I included thinly-sliced shallot as well. As you can tell, this recipe is flexible, so work with the ingredients you have access to and feel free to be creative! Add the sliced vegetables into the salad dressing, and mix them around. Let the vegetables sit to soak up the dressing’s flavor for at least 10 minutes. 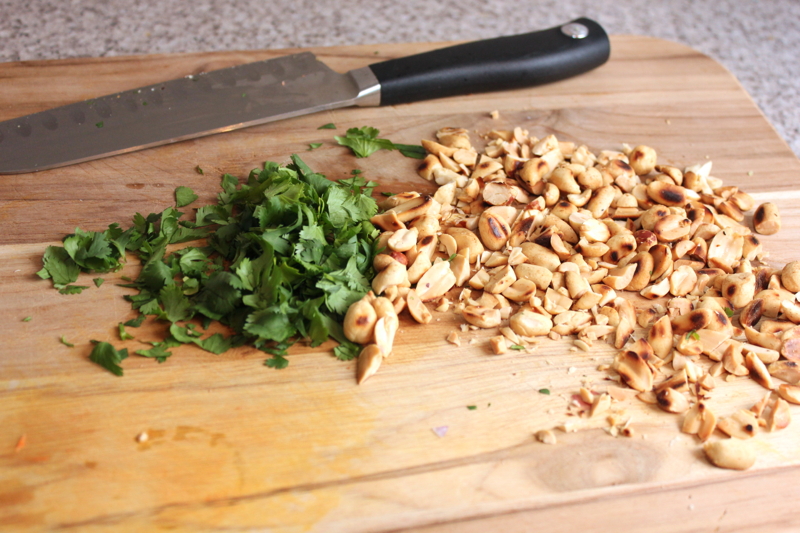 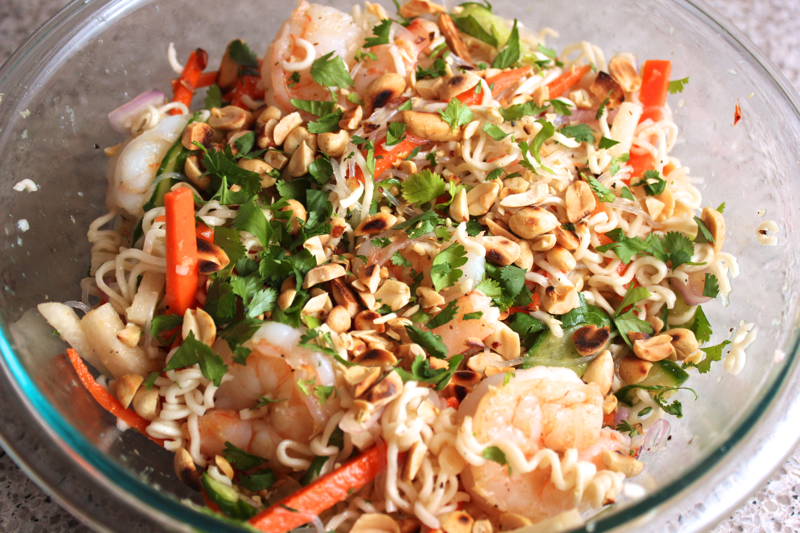 Once everything is prepared, add the vegetables, shrimp, and half of the peanuts and cilantro to the bowl of noodles. Toss everything together very well with tongs. 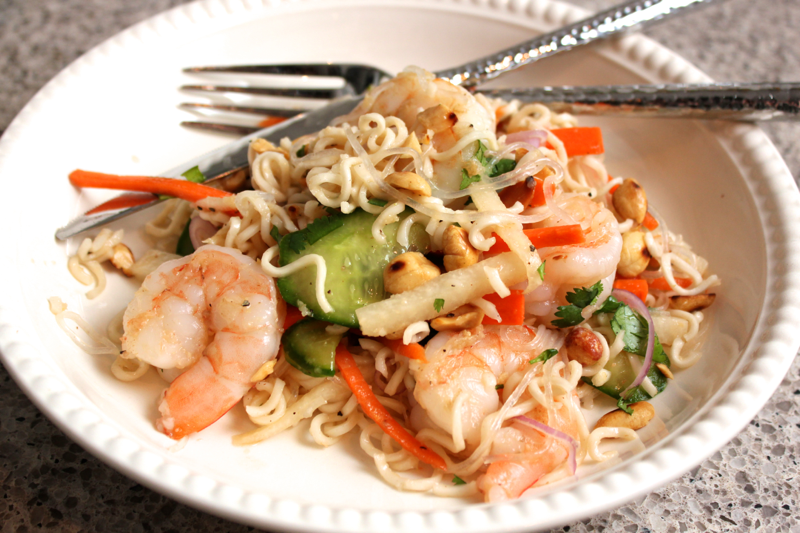 Garnish the top of the salad with the remaining peanuts and cilantro, and then serve the salad in individual bowls. The vegetables become SO flavorful from their brief time soaking in the dressing, and their crunchiness adds a wonderful texture. Shrimp straight from the skillet warm up this salad temperature-wise, and the toasted peanuts add a wonderful depth. We polished this salad off, and now I’m craving it again as the weather gets hotter and hotter. As soon as I see a radish for sale, I’ll know it’s time 🙂

This recipe is adapted from Bon Appétit.