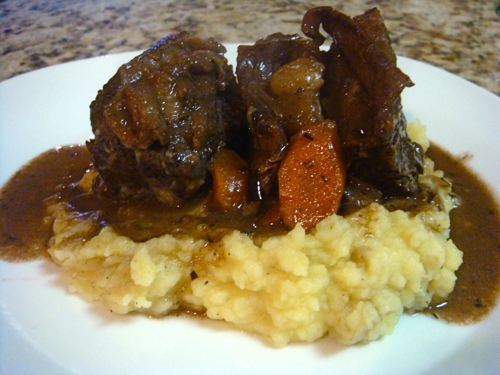 These short ribs are the best! They’re the perfect marriage between a classic boeuf bourgignon and something you might find in a modern restaurant (at least you’d find them in my restaurant if I had one). They are so tender that the bones fall right out of them, and if you’re lucky enough to have leftovers, they make the PERFECT sandwich filling. Just thinking about it is making me want to cook up another batch at this very moment! 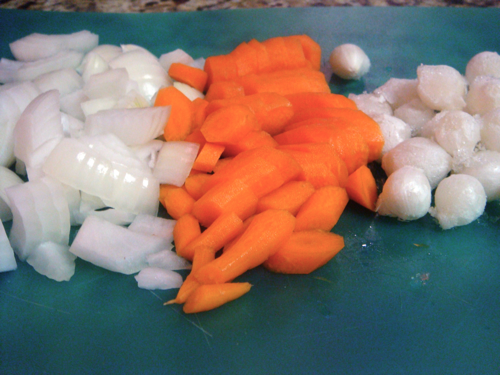 To make these short ribs, first chop up some onions, carrots, and garlic (I forgot the garlic here). I had some frozen pearl onions, so I added them too. 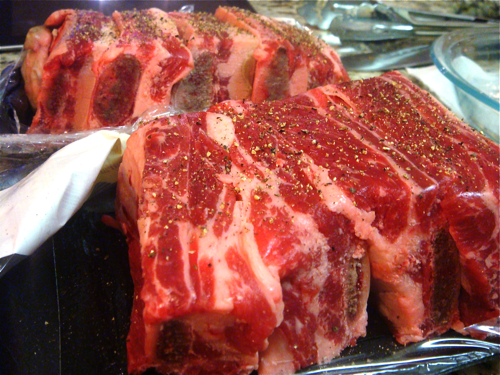 Then, grind some pepper over your short ribs. Three ribs per person are enough for a serving, but it’s always good to have some extras. I made 9 short ribs here. 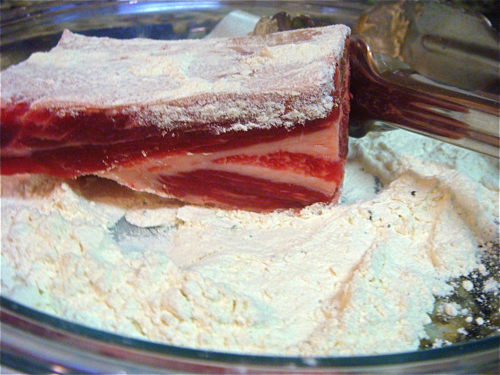 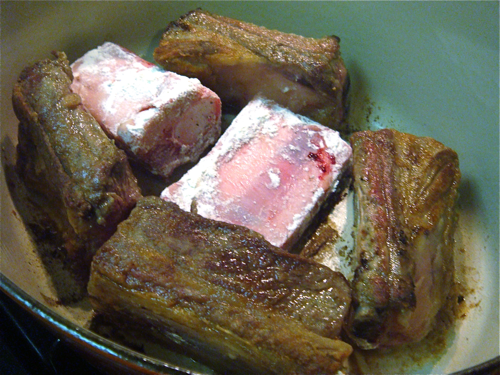 Then, add some olive oil to a dutch oven or heavy pot that can be used both on the stovetop and in the oven. Turn the heat to high and brown the short ribs for 30-45 seconds per side. This is the most burdensome part of making the short ribs, but it helps to get rid of the flour’s raw flavor and gives the ribs a nice color. 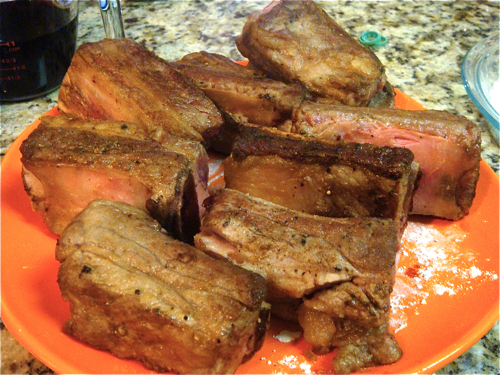 If you’re making more short ribs than can fit in your pot, brown them in batches. Once they are all browned, remove them to a side plate. 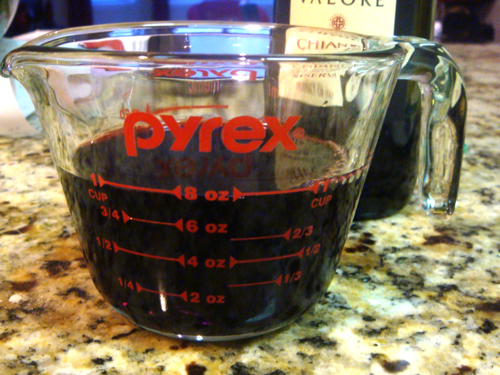 Turn the heat to medium and add your vegetables to the pot. Let them cook for about 2 minutes or until they soften. Then, add two cups of red wine to the mixture and scrape the bottom of your pot with a wooden spoon to incorporate any stuck-on browned bits. 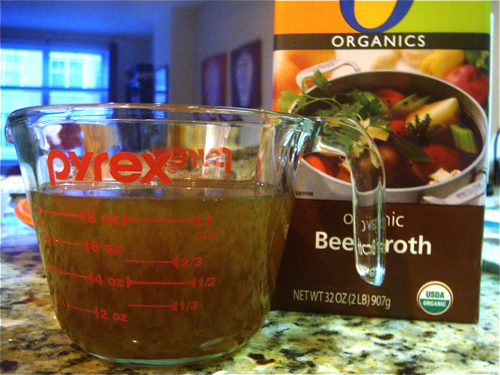 Once the wine comes to a boil, add 2 cups of beef broth. Then, season the liquid with salt, pepper, rosemary, and thyme. 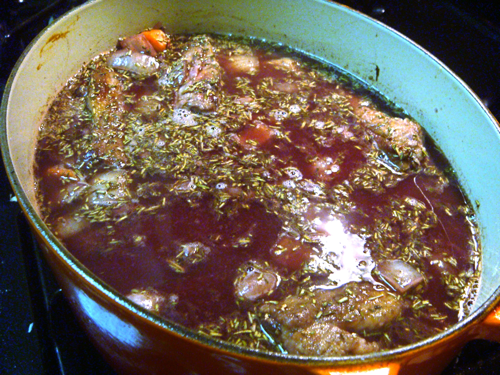 Return your short ribs to the pot making sure that they’re mostly covered with the liquid. If your pot is on the smaller side, it helps to put the short ribs in on their side so they take up less space. Then, cover the pot and put it into a 350ºF oven for 2 hours. 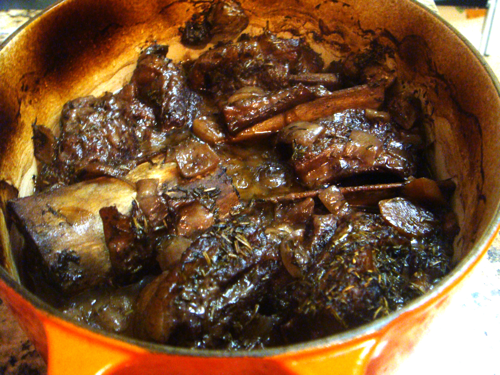 After the 2 hours, turn your oven down to 325ºF and cook the ribs for another 30 minutes. Once these hours elapse, your kitchen should smell absolutely delightful, your short ribs should be fall-off-the-bone tender, and the liquid should have concentrated. Short ribs, however, are a very fatty cut of meat, so they will have released a lot of fat into the liquid. If you let the pot sit for a minute, you will see all of this fat rise to the surface. You can try to skim it off, but it is much easier to make these short ribs a day before you plan to serve them (the extra day makes the flavors even better too) and instead refrigerate the pot to solidify the fat. 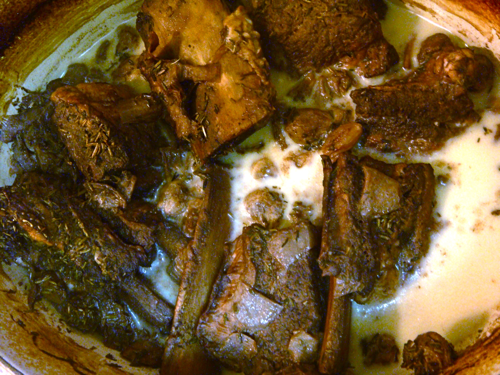 Once the short ribs fully cool, you will see the white, solid fat on the surface of the gravy. This should rightly disgust you. It’s time to take action to remove that artery clogger! 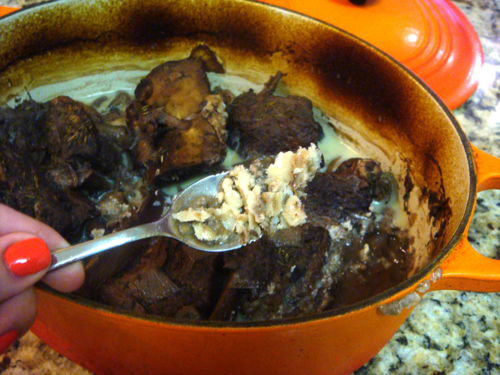 Simply take a spoon and remove the fat from the pot. It should come off very easily. If you don’t want to make your dinner a day in advance, you can use cubed stewing beef instead of short ribs. They have a much lower fat content, so they don’t release nearly as much fat when they cook. The only difference in cooking the cubes is that you will not coat them in flour before browning them. This approach is more in line with a traditional boeuf bourgignon, but it is equally delicious. 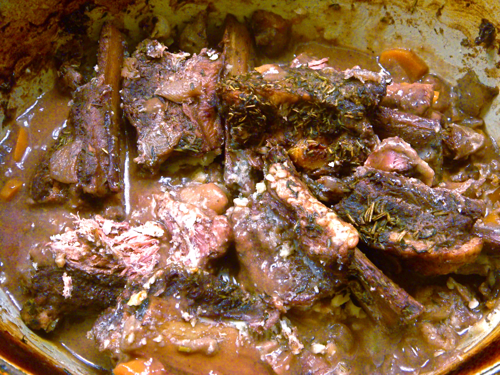 Your short ribs should look more normal once all of the fat is removed. Then, return the lid to the pot and reheat it on the stovetop over medium heat until it boils and the ribs are warmed through. 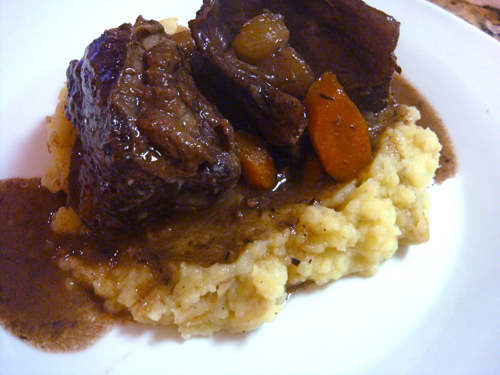 Serve the short ribs over your favorite starch. Some people like polenta, but mashed potatoes are my favorite (but I bet you could guess that. Exhibit A and B). Make sure to spoon some gravy over the starch, and don’t forget to top everything off with some of the vegetables that stewed with the short ribs. The carrots end up being the most flavorful because they act as a sponge and absorb the gravy. Yum! You should seriously try to have left overs to put on a good crusty sandwich roll the next day! Drool…

This recipe was adapted from Julia Child’s Mastering the Art of French Cooking and the Pioneer Woman.