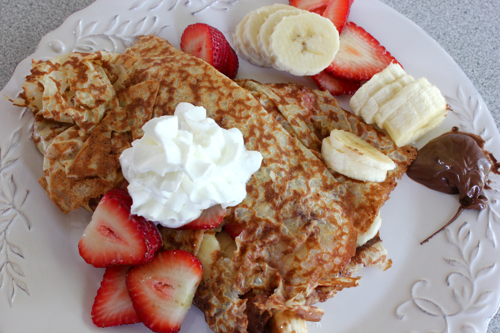 I recently came across a post from David Lebovitz’s website on foods that should not be sold in French supermarkets. I agree with almost the entire list. Why, for example, would a French supermarket ever sell Pillsbury crescent-style, bake-at-home croissants? Fresh, delicious croissants are available on EVERY street corner, so there is no need to ever take a shortcut to baking your own. Especially when they probably won’t even be as good. Other things on the list were just gross or weird… canned salad Niçoise anyone?

However, one item on the list just doesn’t belong there: pre-packaged vanilla crêpes. These crêpes offend David Lebovitz so much that he couldn’t muster words to explain why they were bad. I can understand why. Crêpes abound in Paris. You can get one freshly cooked on every corner. And they aren’t too hard to make at home either. If I were in Paris, there is no chance I would waste my appetite on supermarket crêpes.

But David Lebovitz didn’t think of the Paris-sick traveller, the person whose mother orders her to descend upon Bon Marché, buy bags of the vanilla crêpes, and smuggle them through customs so they can be stashed in an American freezer. Of course we can make  our own crêpes, but what if we want to have a small bite from Paris (even if it doesn’t taste like any crêpes you’ll find there)? Pre-packaged vanilla crêpes are the perfect solution! Baguettes and croissants and comté just aren’t practical souvenirs because they squish or go stale or stink.

So before anyone goes boycotting (or manifestation-ing) French supermarkets to rid these crêpes from their shelves, stop for a moment and think of me and my mom. Better yet, send us your nearest crêpe maker.