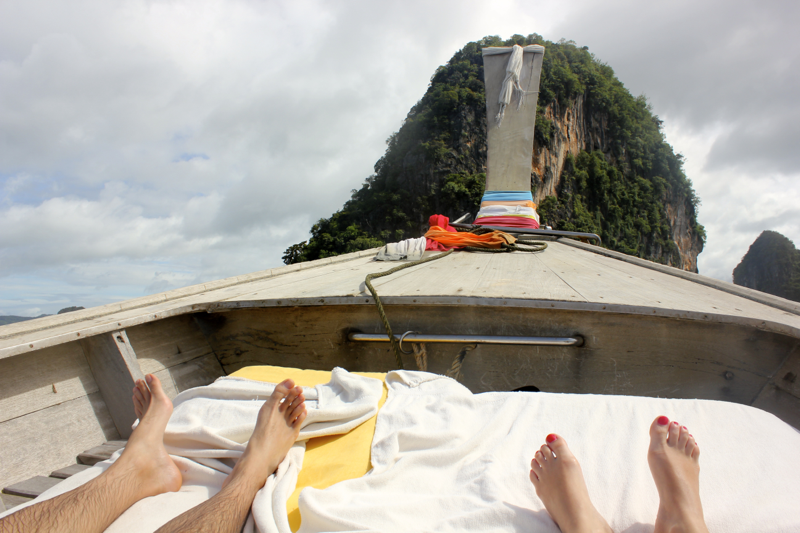 Here is the last, and best, installment of our trip to Thailand. If I return to Thailand, I will beeline for the islands. We stayed in the Phang Nga Bay, a 45 minute boat ride from both Phuket and Krabi. It was the most beautiful place I’ve ever seen, with its clear, turquoise water and limestone pillars jutting out of the calm sea. The island had the best qualities we experienced sprinkled around Thailand, all captured in one place- kind people, delicious food, gorgeous views, a temperate climate, nature, and pure relaxation. 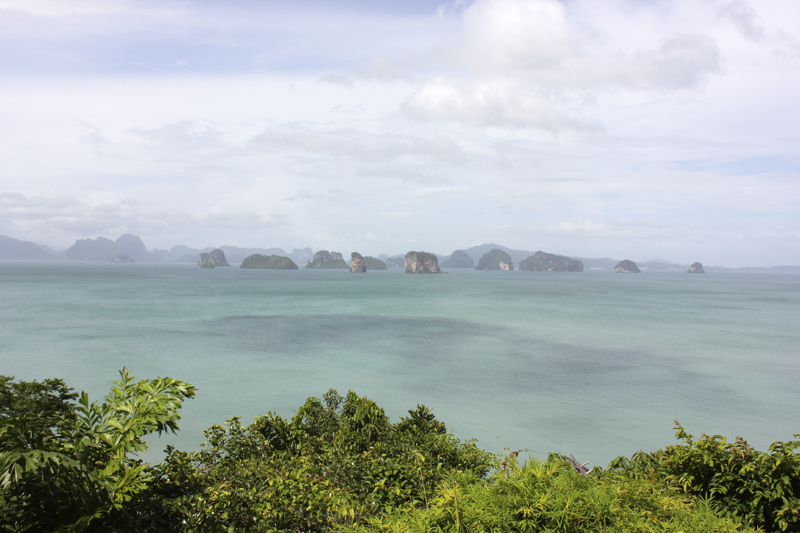 We had some rainy, overcast days in the islands, but the limestone cliffs looked majestic in every kind of light- sunrise, dense fog, bright sun, and twilight. There were passing showers even on the clearest days, and we could watch rain clouds empty themselves as they passed in front of the limestone formations, making them disappear. 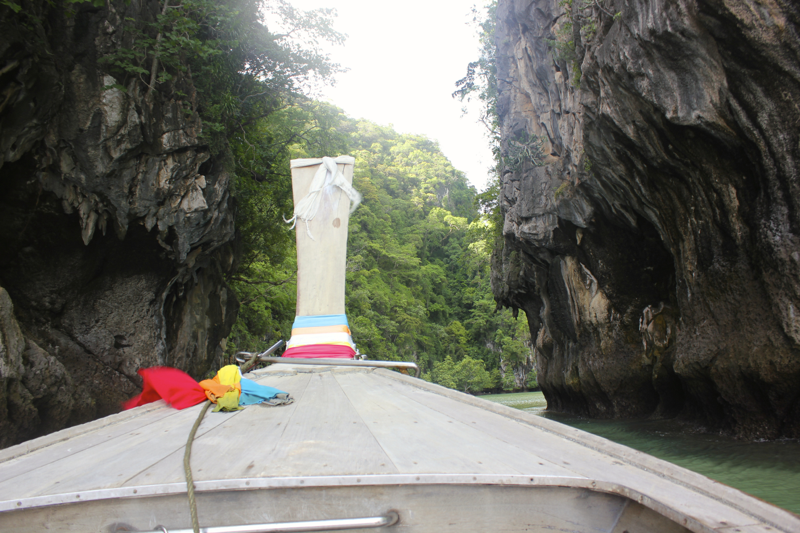 We hired a long-tail boat to take us on a local island tour, and we got to experience the limestone pillars up close. They are even more beautiful at a short distance, and this one housed a secret inner lagoon. The water was shallow, and we could wade around inside the private oasis. I always assumed that people rowed long-tail boats with long paddles, but the boats are actually powered by disembodied car engines. Very innovative! 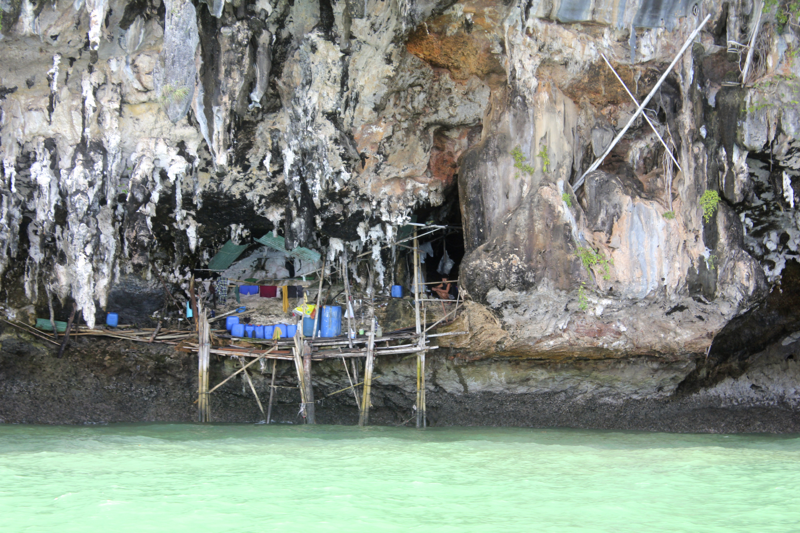 What we didn’t expect from a distance is that people have taken up residence on many of the limestone islands. Some people were living on their beaches, selling beer and bathroom access to visitors, and drying freshly-caught fish. Other people found natural caves in the limestone that they turned into ramshackle homes. They rigged up bamboo platforms, filled jugs with fresh water, and lived a very picturesque, but probably boring, life. 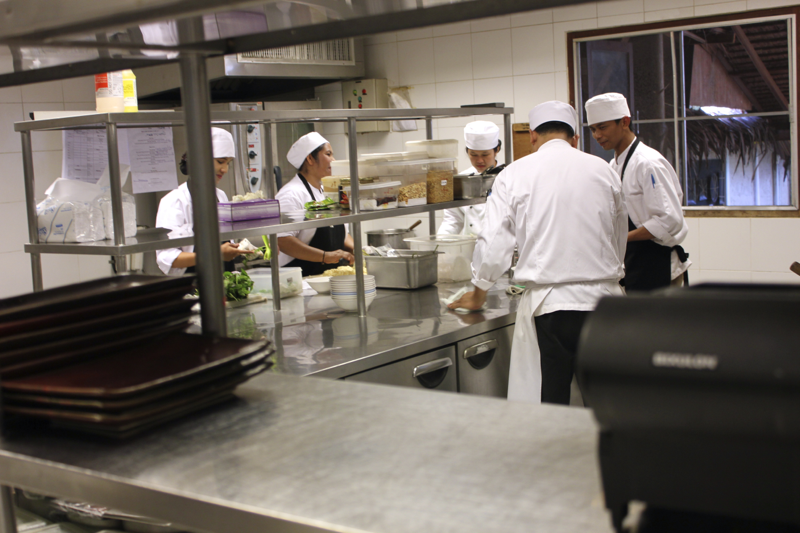 And, finally, we took a cooking class! The class started with a tour around the food-centric parts of the hotel. We saw the hotel kitchen, where we learned that women make all of the curries and men make all of the stir-fries because only men are strong enough to maneuver the woks. Hrmph… 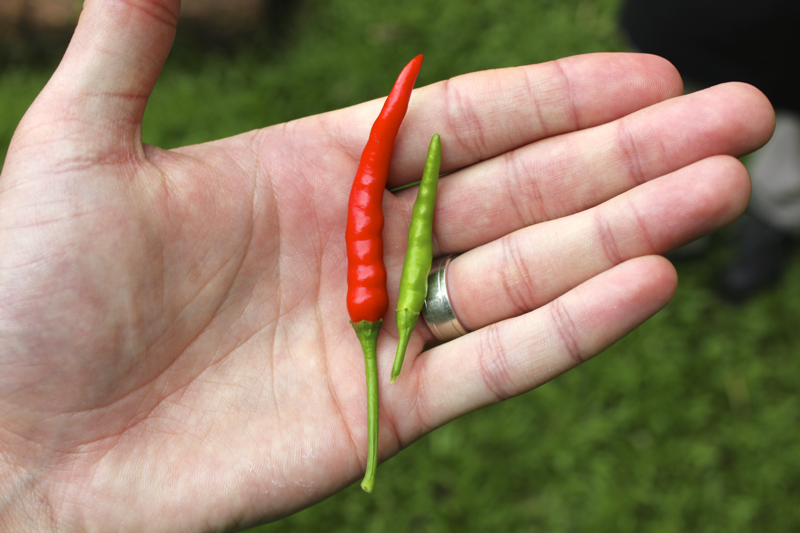 We saw the hotel’s extensive gardens and got to examine all of the different herbs, fruits, and vegetables growing there. They even had a hut where they cultivated different varieties of mushrooms! It was really educational to see how the different ingredients looked growing naturally, and hopefully, the knowledge will help me track those ingredients down now that we are home. 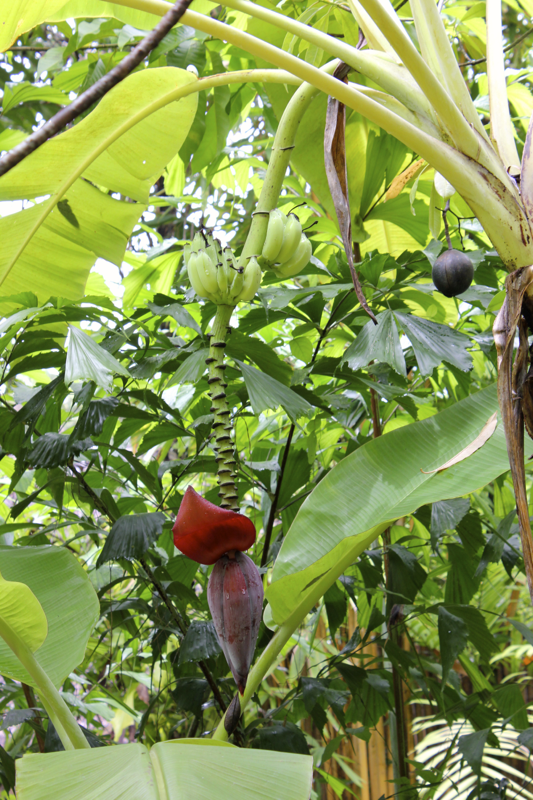 We also saw a bunch of tiny bananas growing, and we had a big bundle of them waiting in our room when we arrived. They were sweet and tasty! 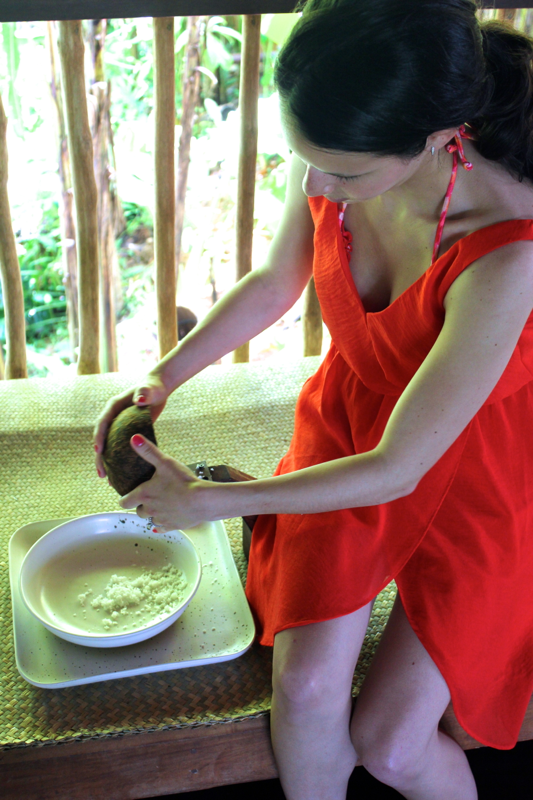 Back at the class, we learned how to make coconut milk! Scrape the inside of a brown coconut out using sharp razor teeth, mix the shredded coconut meat with water, strain out the meat, and ta-da! Presto coconut milk. 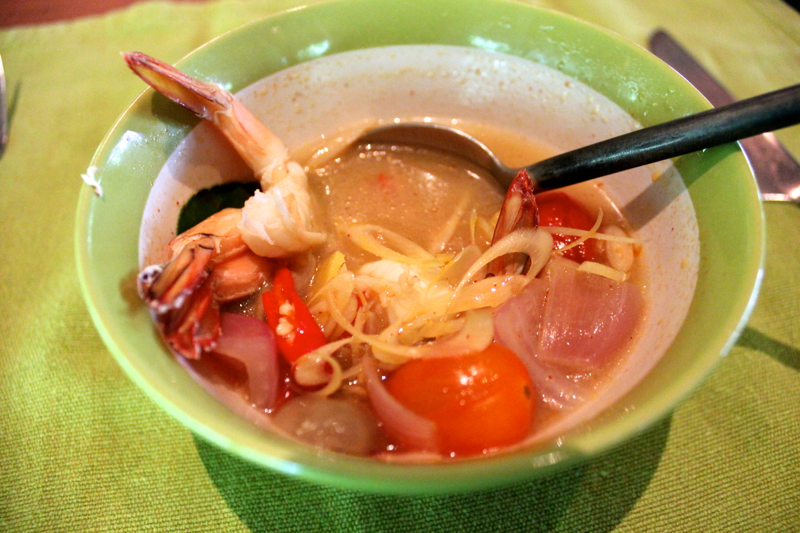 Here is the complete history of my life and tom yum soup: I first ordered tom yum soup in a now-closed DC restaurant, and I was convinced that I was presented with a bowl of vomit. After a few years, I decided to give tom yum soup another try to figure out whether or not I really was served vomit the first time. My second serving, from another restaurant, wasn’t quite as bad, but it still had a distinctive, vomit-like quality. Fast forward to our first night in Bangkok, and I decided to order tom yum soup- don’t ask me why. But it was amazing! No vomit could be detected! And then, we made tom yum soup as the first course in our cooking class, and it was also amazing! I can’t wait to track down the ingredients and make it here, and then I’ll share the recipe with you, and we can all eat tom yum soup in the safety of our own homes. 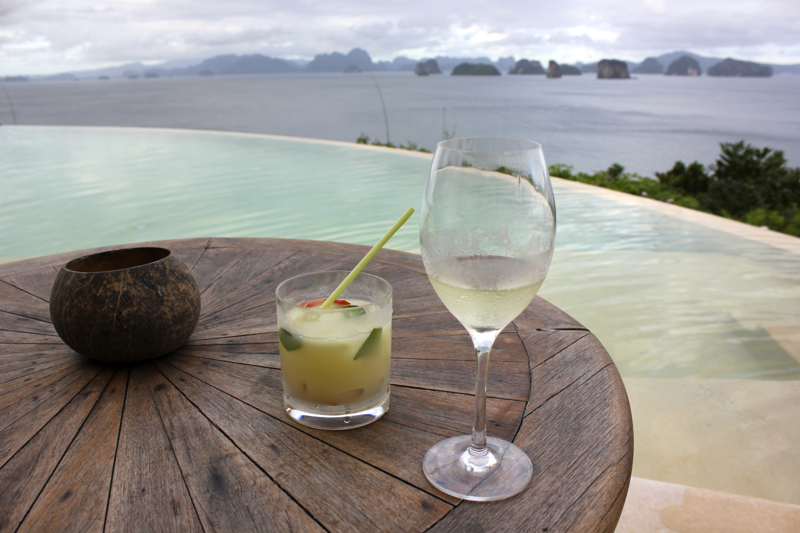 I also learned that tom kha soup is essentially tom yum but with coconut milk in place of the chicken stock. We had a tom kha cocktail that was quite tasty and refreshing. Just a little spice for a warm evening 🙂 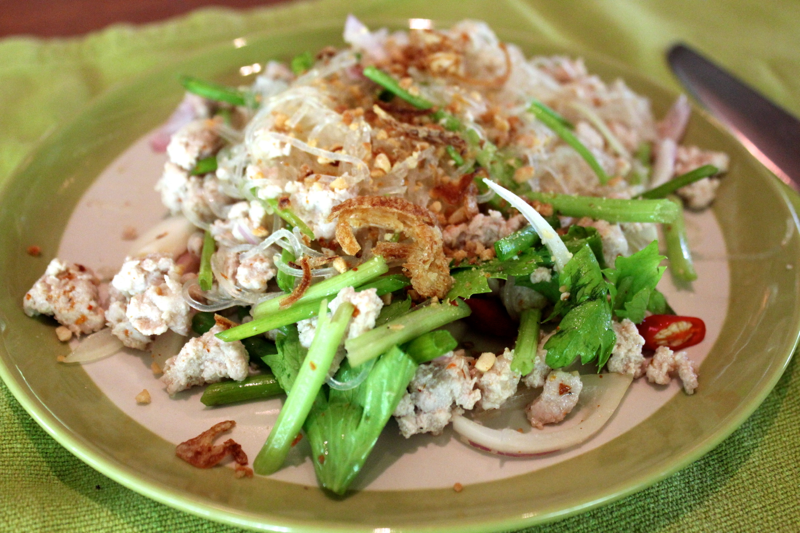 Next, we made a rice noodle salad with pork and vegetables. It was delicious- the instructor was appalled by the amount of chili I put in my salad, but I liked it. I also really enjoyed getting to watch David cook. Even though we were making the same things at the same time, each of our versions tasted a little bit different, but both were delicious! 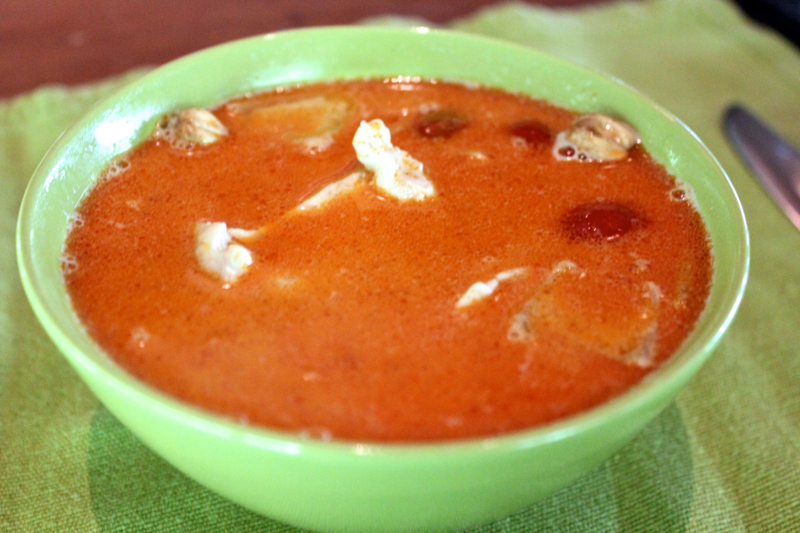 For the main course, we made massaman curry, a mild but flavorful curry that had chicken, sweet potato, tomato, onion, and chestnuts in it. The chestnuts were very different from the chestnuts that I am familiar with. They were imported from Hong Kong, and they had a ridged outside and a very dark color. I seriously thought they were some kind of snail before I realized they were chestnuts. The flavor was also much sweeter. 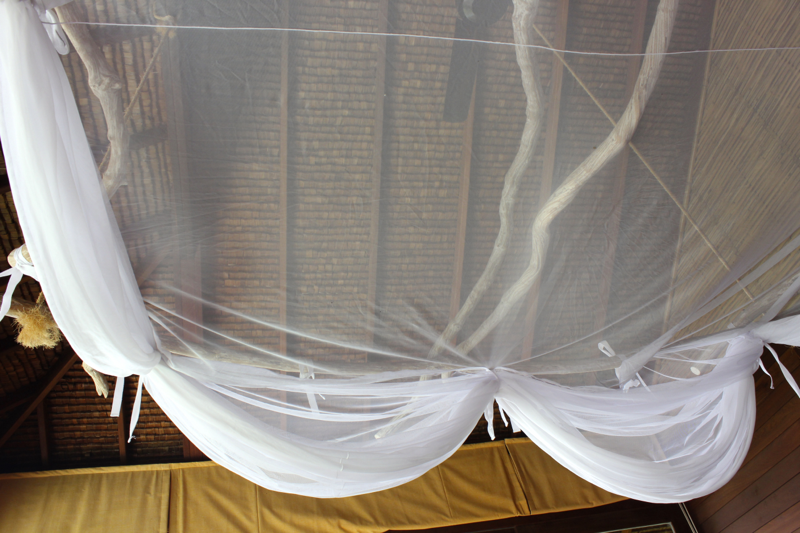 I’ll end with a few shots of our hotel room, which managed to be both incredibly luxurious but rustic at the same time. We slept with a mosquito net for the first time, and I really liked it. It was romantic, but I had to be careful when I got out of bed in the middle of the night not to walk right through it. 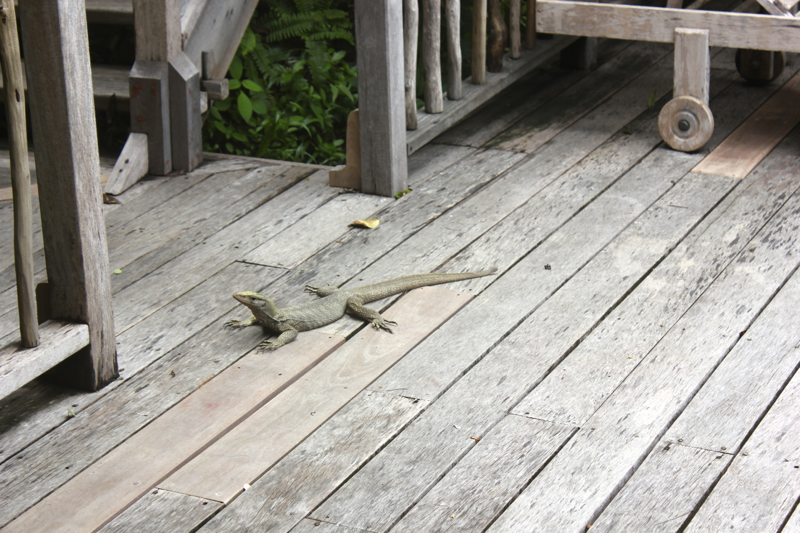 We also had a monitor lizard greet us at the door one day. I jumped back 3 feet when I first noticed it, but then we had to snap away taking pictures for David’s brother, who used to have one as a pet.

But our absolute favorite part about the hotel room was the fish outside our front door. Sleeping fish meant do not disturb, and awake fish meant, well…awake. I loved putting the fish to sleep and waking it up, and I really need to find a way to craft one of these critters. It’s just so cute! And with that, my posts about Thailand come to and end…until I gather up the necessary ingredients and share the recipes I learned there with you!