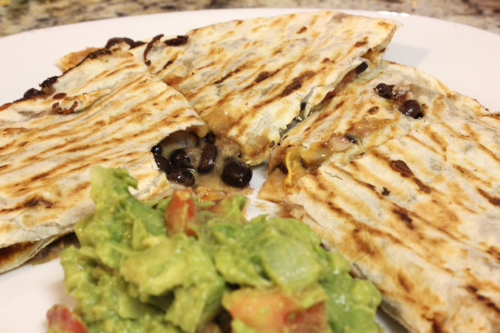 I have been craving black bean quesadillas for days, but Trader Joe’s has been perpetually out of all tortillas. It’s been torture! We finally managed to get some tortillas before the after work rush cleaned out TJ’s stock, so it was time to fulfill my craving. But the quesadillas ended up being so much better than I remembered that my new cravings will never be satisfied. 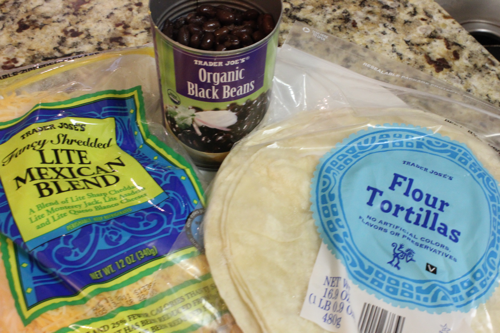 I first had black bean quesadillas in Paris when my friend had us all over to her apartment and made some of the best ones ever. Good Mexican food and black beans were nearly impossible to find in Paris, so we were all really craving it after a few months. Between that, the tequila shots, and my friend’s techno-blasting neighbor, we had a very great night. And I can relive that glory (somewhat) with some flour tortillas, black beans, and mexican shredded cheese (plus some extras) right here in America. 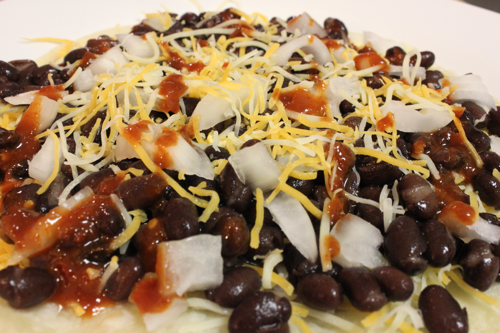 Just pile all the ingredients onto a tortilla. Add some cheese first and last so it keeps the quesadilla stuck together, and fill the middle with anything you want. I used black beans, onions, hot sauce, and tomatoes (not pictured). Yum! Keep in mind that one can of black beans made two whole quesadillas, but they were very filling. Also make sure you don’t overstuff your quesadilla or else it will be really hard to flip later, even with a giant spatula; David learned this the hard way. 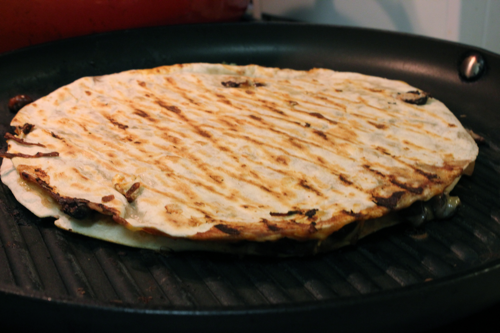 Put your quesadilla on an ungreased pan over medium heat until it browns and gets a little crispy. I used a grill pan because I like seeing the lines. Then flip it over carefully and toast it on the other side. 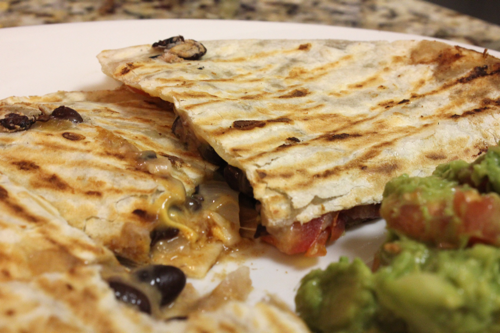 Once your quesadilla is fully cooked, cut it into triangles with a pizza wheel. These quesadillas are best served with some guacamole or salsa to add a little moisture and cut the saltiness of the beans and cheese. This meal really hits the spot because it’s so delicious, fun to make, and even more fun to eat!