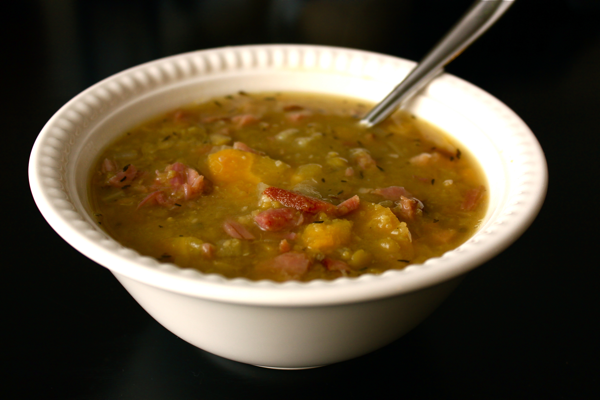 When I was home for the holidays, my mom got me a HUGE ham bone from Honey Baked Ham. It had so much meat on it, I couldn’t believe it. Fortunately, I happened to have a bag of split peas in my cabinet that had been languishing without a purpose for most of their little lives. So split pea soup it was. And what a success it turned out to be! I have no real interest in having any type of restaurant, but I often rate the things I make by whether they would go on my restaurant’s menu. And this soup would definitely be on there. It is so DELICIOUS! I am still in a euphoric state of soup-induced shock. Slurp. 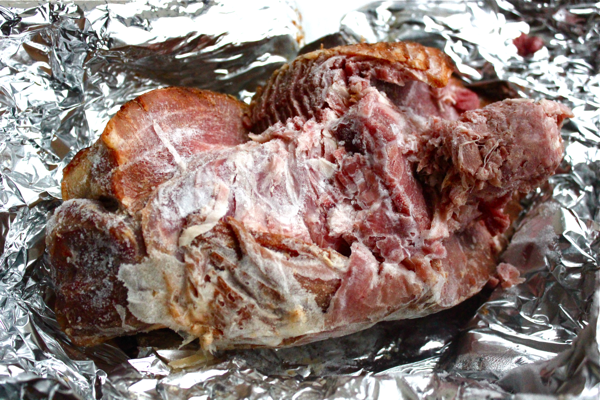 Check out this ham bone! It’s huge! It didn’t even fit in my regular soup pot, so I had to cook it in my oval dutch oven, which is the only thing I have that could accommodate the hunk-o-meat. This ham was easily bigger than my head. I was so ready to make soup that the ham never had time to fully thaw from my freezer, but that didn’t matter at all. Get thee to Honey Baked Ham (or your butcher?) and buy one of these babies. 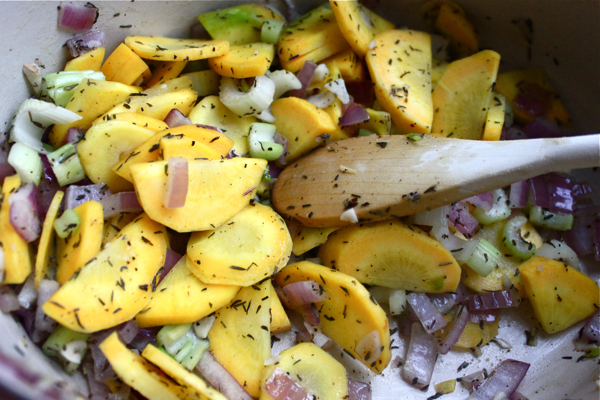 To make this soup, find a large pot and brown 1/2 of a diced onion, 2 minced garlic cloves, 3 sliced celery stalks, and 2 sliced carrots in olive oil. Season them with 1 tablespoon of dried thyme leaves and some black pepper. 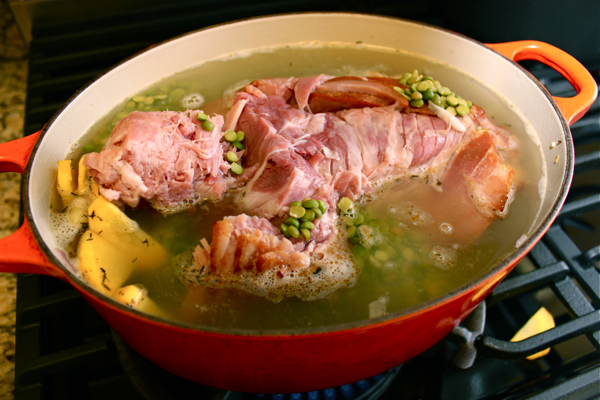 Do your best to fit the ham bone into the pot, and add in 16 ounces of dried split peas (1 bag). Fill the pot with 5 cups of water. Bring the soup to a boil and then down to a simmer. Partially cover the pot, and let the soup cook for 1 hour. 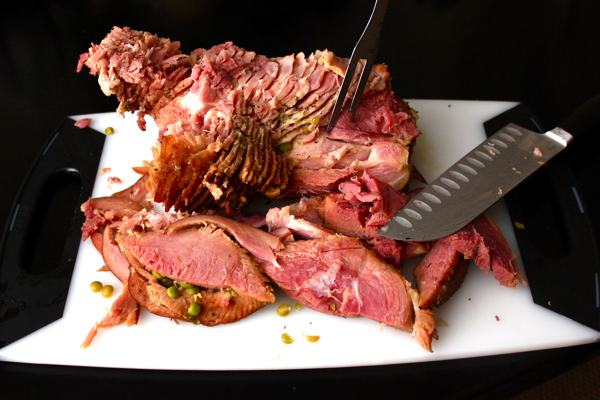 After the hour, remove the ham bone to a cutting board. Slice as much meat away from the bone as you can. Dice the meat up into manageable chunks. I got almost 3 cups(!) of ham off of my bone, and I could have gotten more if I’d put more effort into it. Add the diced ham back into the pot.

Now that there is more room in the pot without the ham bone, it’s time to add more liquid. But first, taste your soup. Your broth should be incredibly flavorful from being simmered with the ham bone. If that is the case, add 5 more cups of water to the pot. If your soup is less flavorful (how unfortunate!), then you can add 5 cups of chicken broth (or a combination of chicken broth and water). After the extra liquid is added, taste the broth and add salt if you need it. If your soup is too salty, dice up a potato and add that in. Rachael Ray says that potato does a good job of absorbing salt from soups. 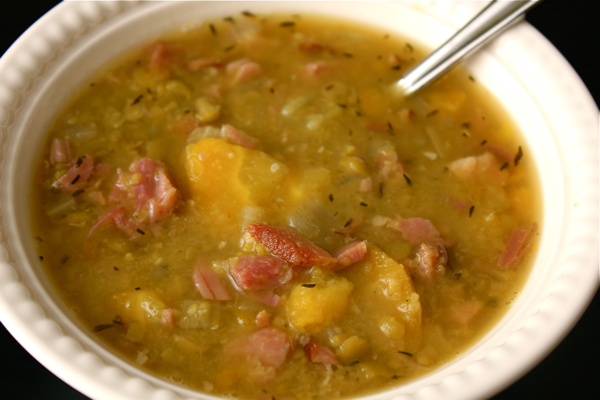 Bring the soup to a simmer, partially cover the pot, and let it cook for 1 hour more. After that time, your split peas should be falling apart. You can use a potato masher to push down on the soup to help break up the peas even more. Or you could blend it, but I prefer chunky soups. They make life more exciting.

Now serve that soup up. The carrots and celery should be meltingly tender, as the ham and peas should be. I just can’t get over the rich flavors in this soup. All I added was water, so the ham bone did an A+ job of leeching its wonderful flavor. With all of the ham in this soup, it is really filling. A big bowl is all you need for a joyful dinner and a happy stomach. This recipe also makes a lot of soup (hello, 10 cups of liquid) so freeze any extras for a snowy day.