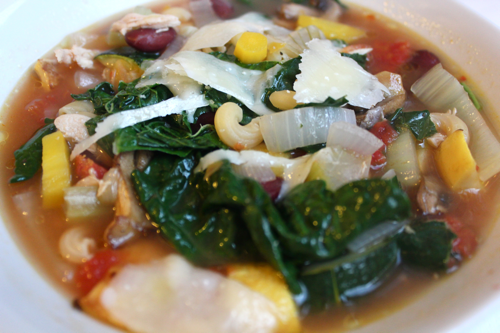 I make variations of this soup for all seasons, and this one is perfect for summer. It’s light, healthy, and loaded with vegetables. The only problem is its name… I never know how to pronounce minestrone. Is it mine-strone or mine-stroney? Well, it’s delicious no matter what it’s called. And it’s also very flexible- you can make this soup a hundred different ways all depending on what ingredients you have available. The secret to making a great soup is to add the longer cooking ingredients first and the faster cooking ones towards the end. That way, everything is perfectly tender when you’re ready to eat. 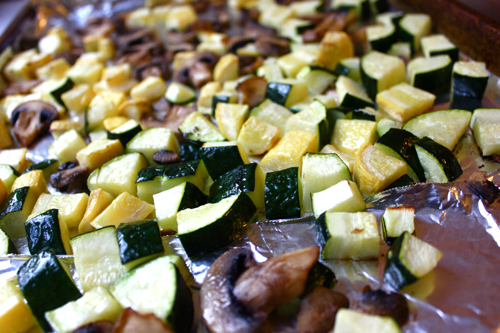 First, pre-heat your oven to 500ºF and chop up a green zucchini, a yellow summer squash, and some mushrooms. Toss them in olive oil, spread them evenly on a baking sheet, and put them in the oven for 10 minutes until they get the slightest bit of black on some of the edges. This roasting process gives the veggies a great, toasty flavor once they’re added to the soup. 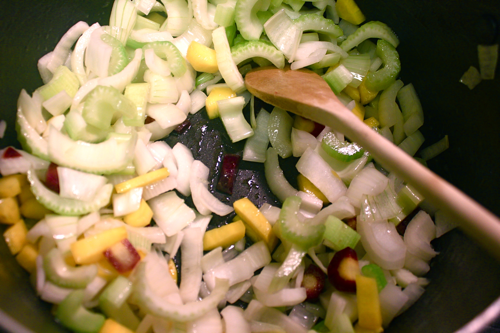 Then, chop up 2 or 3 carrots, 1 onion, 3 stalks of celery, and 3 garlic cloves. Add them to a large pot with some olive oil and cook them for about 5 minutes or until they start to sweat. Add 8 cups of broth to the pot with the veggies. I used half vegetable broth and half beef broth because that was what I had in my cabinet- proof that any broth will taste delicious! Bring your pot to a boil and then turn the heat down and let it simmer for about 5 minutes. 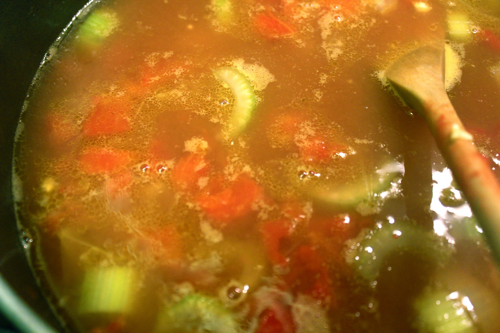 After the 5 minutes, add in a can of diced tomatoes, 1/2 cup of corn, and a can of beans. I used red kidney beans because I like them in my soup. You can add whatever beans make you happy. Also add about 1 1/2 cups of dried pasta to the pot and stir it all around. My elbow noodles took 10 minutes to cook, so add yours accordingly if it will take more or less time. For example, if your pasta will cook in 2 minutes, add it to the pot 2 minutes before you want to serve your soup.

Ten minutes later (or whenever your pasta is slated to finish cooking) add your roasted veggies into the pot. You want them to have just enough time to get warm before serving. You can also add in some shredded, cooked chicken, kale (or spinach), and basil leaves to wilt down into the soup. Oh, and the seasonings! Don’t forget to add salt and pepper (even some red pepper flakes) to your soup according to taste.

This soup is best served in a big, hearty bowl with some parmesan cheese on top. I also like drizzling a little olive oil over my soups for extra flavor. I opted for some basil oil and harissa oil this time around. MMM and some crusty bread- I bought a loaf of ciabatta from Bread and Chocolate last week, sliced it, and put it in the freezer. I’ve been toasting slices when I need them, and they have been fabulous!!

The roasting technique in this soup was guided by the Pioneer Woman.